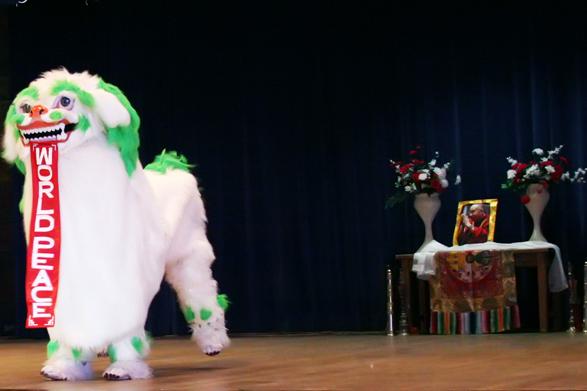 While some students took notes from a chalkboard, students from Ms. Amy Ritchie’s and Mr. Michael Crain’s humanities classes were educated on a new subject: enlightenment. Tibetan monks representing the Drepung Gomang Monastery in southern India visited Manual Monday, February 6, during second block on Monday to extend their mission of promoting love and compassion, while raising awareness of violence in Tibet. “It’s really cool that they’re coming here and teaching us about how they live,” said Jane Rubenstein (12). Their presentation, lasting for much of the block, began with a ritual of bowing to an image of the Dalai Lama, a common tradition done when he is not physically present. This was followed by a series of performances representing different aspects of the Tibetan culture. “I loved the Yak dance,” said Amy Ritchie (Humanities). “I found it fascinating that people can honor their relationship. We take out relationship with animals as food for granted.” The “Yak dance”, as many students called it, was a representation of  the domestication of the animal in Nepal, India, and Tibet. For many in the area, it’s seen as a way to honor the animal for its many contributions to the well-being of the people. As students laughed through the more humorous portion of the performance, the tone soon changed towards the end, when the monks performed a special prayer. This prayer, titled the “Truth Prayer” by the Dalai Lama, performed at every stop the monks make. While this is banned in the People’s Republic of China, the monks still perform it because it is “for the people’s success and struggles in Tibet.” “When I saw the humility of the monks, I was astounded,” said Ritchie. “I find is sad how much Americans take their government and their role in the government for granted. I saw, firsthand, political prisoners.” Despite being religious exiles of their home country, the monks still continue city to city across America, delivering a message of peace and love. “America is a very good country,” said the head monk, Nawang Tsondu. “It is a very developed country, with very, very different people.” [nggallery id=552]