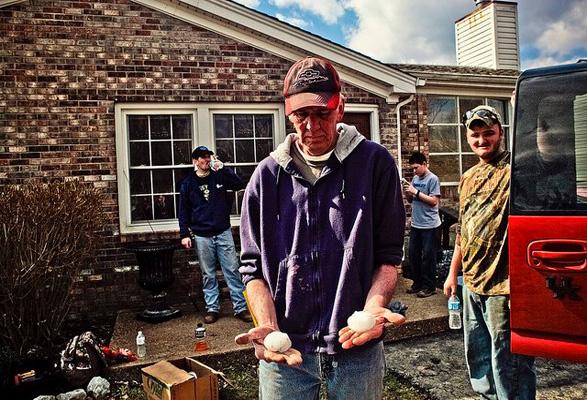 In the wake of tornadoes that ripped through several Indiana counties Friday night, Henryville residents found themselves in a state of emergency. A group of RedEye staffers visited the town to survey the damage.

State troopers, repair vehicles, moving vans, Humvees, school buses, crane lifts, and Subarus lined the streets of Henryville, Indiana, in the chaos of Saturday morning. I and some other RedEye staffers rode into town with mouths agape, taking in the hordes of government officials and construction workers swarming the streets. A school bus had been thrown into a small maintenance repair shop, and the edge of a forested area behind a row of houses was torn to pieces. Three-inch-wide craters littered the ground where thick chunks of hail had hit the night before, destroying car windows and ripping the siding off houses. I swore under my breath.

Since the town—like many others—could not function with so much damage, maneuvering inside was difficult. Several streets were blockaded, and troopers stood watch in every damaged area. The other staffers and I piled out of our car and wandered toward a stretch of windblown residential backyards near where the 175-mph tornado had whipped through Henryville on Friday afternoon, almost immediately after school for Henryville Elementary, Middle and High had let out. Debris littered the grass and every home had been hit with something, whether it be a tree, hail, some vehicle, or miscellaneous material blown in from somewhere else in town. The line had blurred between whose house was whose; wanderers and piles of collected trash were everywhere.

The scene must have been similar in Marysville, Pekin, and towns in Laurel, Kenton, Menifee, Lawrence, and Johnson counties; as of Saturday night, the overall death toll had risen to 34, only one of them in Henryville itself.

After hastily shooting a few video panoramas of the site, Tara Steiden (11) and I crossed the street to the campus that housed all three Henryville schools. Caution tape stretched around the entire area. After being turned away from the front of the school by a man in uniform, we climbed a felled tree over a small stream and worked our way up a hill to the back parking lot of the school, where the high school’s gym was—or had been.

The entire outer wall of the gym had been ripped off, and rubble was piled on the bleachers and basketball court. Tattered maroon flags touting the championship records of Henryville High’s sports teams still hung, just barely, from the gym ceiling. In the parking lot, cars with broken windows sat abandoned next to a light pole bent at a sixty-degree angle. A lone state trooper sat in his car, keeping watch.

When we had gotten what we needed, silently imagining what Marysville must look like, a town that was hit even harder, we wandered away from the parking lot and met a Henrysville High student and a student from Scottsburg. One was carrying a brick he’d retrieved from a damage site as a memento.

After initial interviewing, Henryville High junior Dylan Collins and his friend Alex Berna sat to talk with us about the storm. Dylan recounted the evening, after his mother had pulled him and his siblings out of class and he had watched the shape of the tornado in the distance from the safety of his house.

“I ran inside, and after that it was just rain and silence. That’s all you heard, was the rain. And then you got into town and you heard all the sirens going off and everything. And this road right here, this main road that you can walk on now, was all ambulances. From everywhere,” he said. “Last night was the quietest I’ve ever heard Henryville in my life, and I’ve lived here since I was a baby. I grew up in this town, and it’s nothing like it was.”

Though the town was in bad shape, power had come back on in some homes, and a couple thousand volunteers had showed up to help; in fact, officials had had to begin turning them away. RedEye staffers Patrick Haertel (11) and Seth Fischer (12) came across a local woman who catered for a living and who had volunteered her time to make pounds of food for anyone who needed it. It seemed as though no one in the town was content to sit inside.

Both students said it was rumored that the Federal Emergency Management Agency (FEMA) would set up trailers in the next few weeks in which Henryville schools could hold classes. An additional possibility was that students would be sent to Scottsburg or Silver Creek High Schools for the time being.

Other rumors flew between confused residents, according to Alex and Dylan. One was that a man had been impaled by a hailstone; another was that a woman had thrown herself over her children to protect them, losing her own legs in the process.

“That was probably the worst part about yesterday is that you didn’t know. You had no contact with the outside world other than Henryville,” he said. “And what you saw in Henryville was just… it was terrible.”

Video footage and audio from Henryville, as well as other RedEye coverage, here.