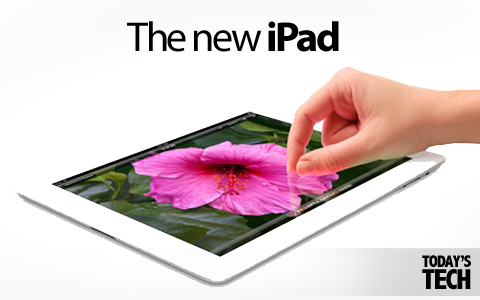 As we all expected, the new iPad was announced at Apple’s yearly iPad convention, held in San Francisco, California. Tim Cook did a good job taking Jobs’ place presenting the new features. He did make some (offensive) comments against other companies, but it was still a well-put event. It did still have that default Apple order of slides that we’ve all come to know and love (starting with sales, ending with features) though it was still a surprise to me. I didn’t really expect Apple to do what they did with the new iPad.

Here is a quick overview on the new iPad:

Looks good, right? I would say so, but there are some things Apple missed out on. The 5 mega-pixel camera is not great; they could’ve gone to 8 mega-pixels (though I don’t really care about the camera on the tablet, just the front facing one for video calls). The addition of 4G LTE was very surprising; I didn’t think that LTE was widely available enough to be added to the new iPad, but I guess Apple knows what they’re doing (Apple stock went up to $600 this week). The display is probably one of the best features of the new iPad. I currently own an iPhone 4 and upgraded from the iPhone 3G. All I can say is that the “retina display” makes a HUGE difference. Everything feels cleaner and crisper, and the OS feels much better. Once you see a “retina” display, you won’t want to go back. It’s that big of a difference. The best part is, Apple kept the same battery life in the new iPad even with the 4G and retina display.

The A5X chip was a nice addition, but not a huge upgrade. It’s basically the A5 chip in the iPhone 4S, with the addition of a new GPU. This also leads me to my next point, this “voice dictation” Apple added. Really? Voice dictation that requires an Internet connection as well? Why not just put Siri on the new iPad? It has the same processing ability, so why not? Oh, I know; they need to have something to add their next gen iPad. Very clever, Apple, very clever.

The iPad has a new LTE chip, a fast processor, and even a new screen, and it still manages to have the same amount of battery life as the iPad 2; but there’s been a lot of speculation about the new iPad ever since its release. People have reported that the new iPad gets really hot after using for a long period of time. Apple stated that it still “operate[s] well within [Apple’s] thermal specifications.” There’s also been several reports dealing with Wi-Fi reception and charging issues.

Despite its flaws, the new iPad for me is a good upgrade from the iPad 2. I know people are not impressed and whatever but honestly, this retina display has a higher resolution than your HDTV, plus it’s all in a 9.7-inch tablet. I guess we can call that “resolutionary”.