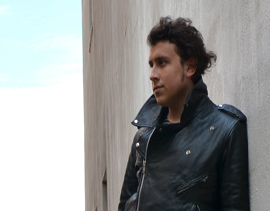 Stevens has been writing music since he was a Freshman at Manual, but didn’t start his professional career until he was an upperclassman, playing at local gigs and shows.

“My Senior year I took a music theory class which just increased my toolkit musically and kind of kicked down the door beyond the three our four chord songs I was writing”, Stevens said.

Stevens, who draws inspiration for his rock music from lyrically acclaimed musicians such as Bob Dylan, is a graduate from YPAS and studied internationally at the Royal Scottish Academy of Music and Drama in Glasgow, Scotland, UK. This gave him a unique opportunity to share his music to a diverse audience.

“I like to play wherever the people are. I’m interested in sharing with people. To varying degrees I think we all go through the same things in life-the same ups and downs,” said Stevens.

(For more information on Ted Stevens, you can check out his website at www.Tedstevensmusic.com)