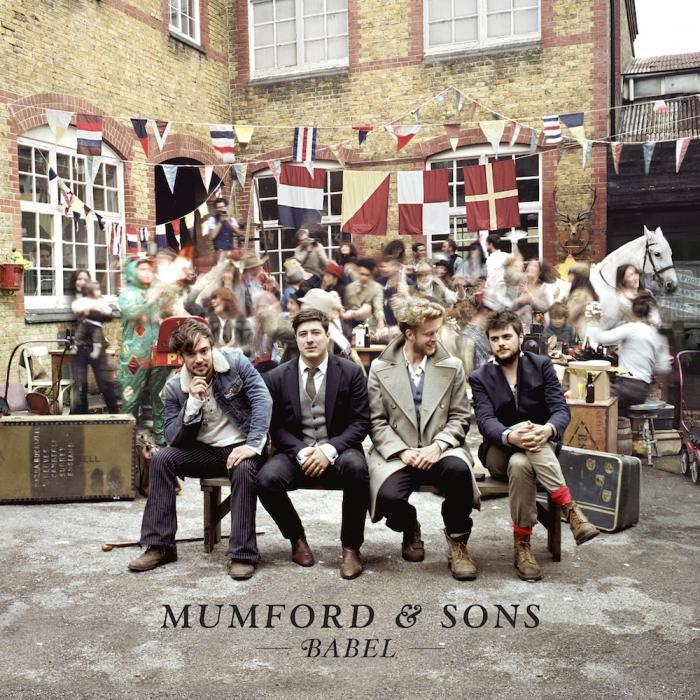 Lyrical Content: 8 out of 10
Production Value: 7 out of 10
Favorite Song: I Will Wait

Overview: Folksy and fun is the sophomore effort of Mumford and Sons. But their songs, anthem-esque and as sing-along inspiring as they may be, also maintain meaning. Lyrics of sin, love, and loss chaperoned by religious undertones along with crashing mandolin, banjo, and damn near any other string instrument imaginable make for a very good album. Between that and singer Marcus Mumford’s unique and refreshing voice, the band gives hope to avid folk rock lovers such as myself. In the popular music market dominated by Pop, Hip-Hop, and R&B, the album Babel is a game-changer. Now considered the fastest selling album of 2012 by the British Official Charts Company, Mumford and Sons is nearing superstar status and solidifying a place in music’s mainstream for now.

TRACK 1: Babel
The boys wasted no time showing off their style. Immediately into a short guitar intro and upbeat string instruments we are thrown to start off the album.

TRACK 2: Whispers in the Dark
Toning it down a little bit with the full out symphonic string sounds, Mumford and Sons brings the blazing banjo to the table with their signature fade in and out of upbeat play that is reminiscent of some U2-esque stylistic choices.

TRACK 3: I Will Wait
In my opinion, the best song on the album. It incorporates deep meaning and masterful production. The first single off the album is rarely the best song, but this is an exception.

TRACK 4: Holland Road
Conflicting feelings arise when I hear this song. Somehow the style of play can be upbeat at points, while still preserving the overall relaxed and beautiful tone. It is also of my favorite songs from a vocal perspective

TRACK 5: Ghosts That We Knew
This song has one of those choruses that I know I will be singing for days. A beautiful mood-provoking song.

TRACK 6: Lover of the Light
You anticipate a rousing musical frenzy throughout the song, and it never comes. But the mellow-toned and deep lyrics are fulfilling enough. Besides, singer Marcus Mumford will on occasion let out a yell or two, just enough to hold you over.

TRACK 7: Lovers’ Eyes
A sweet and sappy song that’s still fun to sing with your friends? Something about the group vocals of the band always make it fun to sing or listen to with other people, regardless of topic. They truly are a band best enjoyed in an arena or stadium as opposed to your iPod.

TRACK 8: Reminder
This is easily the softest song on the album. It’s hard for me to transition into listening to it if I listen to the full album because the difference in tempo is drastic. But a single listen before bed or while relaxing in the hammock is always good.

TRACK 9: Hopeless Wanderer
The guitar in this song catches you a little off guard. The band steps out of their comfort zone for a couple of minutes to play a alternative rock type ballad.

TRACK 10: Broken Crown
A very close second for my favorite song on the album. Lyrical superiority to most other songs they have written and beautiful instrumentation are what makes this song what it is. This is a fantastic song.

TRACK 11: Below My Feet
A lot of well done harmonizing between the band members helped make this a very moving track. A great “mood” track, meaning it’s great for certain moods.

TRACK 12: Not With Haste
With piano being a prominent instrument featured and a change from Mumford’s powerful voice to a sort of melancholic tone and cadence, this track is different, but in a good way. I hope in future work I hear more songs like this and Broken Crown.