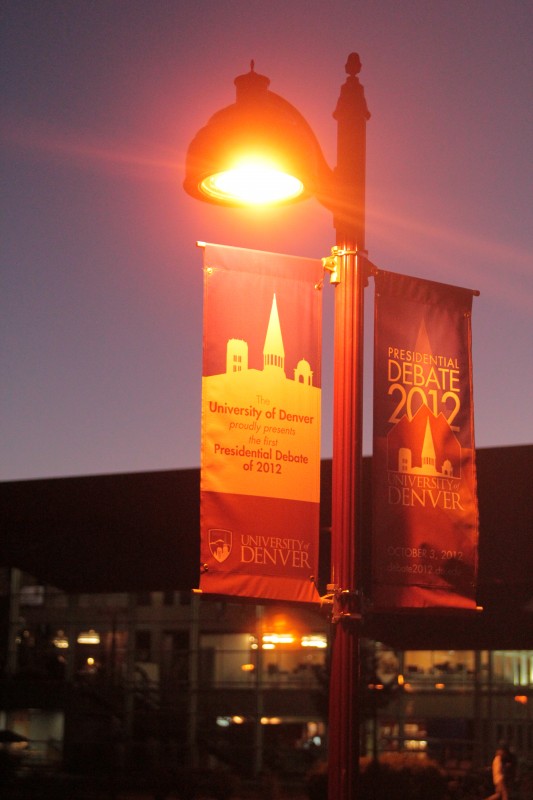 Banners announcing the debate hang from lampposts around the University of Denver's campus.

The first of four presidential and vice presidential debates will take place at the University of Denver’s Magness Arena on Wednesday. Millions of people will watch Barack Obama and challenger Mitt Romney on stage together, hashing out the issues that, in part, will decide the election: is the Affordable Care Act good for the nation? What constitutes a fair tax system? What exactly is the role of government? With the two candidates will be over 3,000 reporters, photographers, videographers, and commentators, ensuring that there is no shortage of angles, perspective, spin.

We, representing all publications in duPont Manual’s Journalism & Communications magnet, join them. Four of us arrived in Denver earlier this afternoon. Tomorrow, we will be at the Buckley Air Force Base when President Obama arrives on Air Force One, and we will be on and around the University of Denver’s campus during the day, continuously updating with new photos, videos, tweets, and blog posts.

Of course, we are not a major news network. We do not have a fleet of satellite trucks, several shoulder-mounted cameras, or a dozen reporters on the ground. What we do have, however, is mobilization – and a unique student perspective.

The focus of our coverage is not to provide minute-by-minute analysis of what goes on in the debate, though we will be live blogging the event and posting opinions, reactions, and commentaries. Our focus is to go where the major news networks can’t — to the college campus, to the students, to the local businesses. We will look not only at who says what during the debate, but we will also look at what it took for the University of Denver to secure the debate, the impact it has on students who live near Magness Arena (why, for instance, are there no political signs hanging from dorm windows?), the frustration of commuters when I-25 is closed tomorrow, the rush of people from out of town who, like us, just want to be part of history.

More than that, we will study ourselves; rather, the role the media plays in presidential debates  Driving around Denver and walking around campus, we saw satellite trucks everywhere: debates are a media circus, and we want to know how their — our — presence affects the local community, as well as the nation’s perception of the event. We will use our resources to study not only the stage and the candidates, but the people behind the glitz, the stories behind the spin.

We’ll be updating continually, with content from our perspective, the student perspective. So stay tuned.