Opinion: Obama would be an A+ president if America were a utopian society 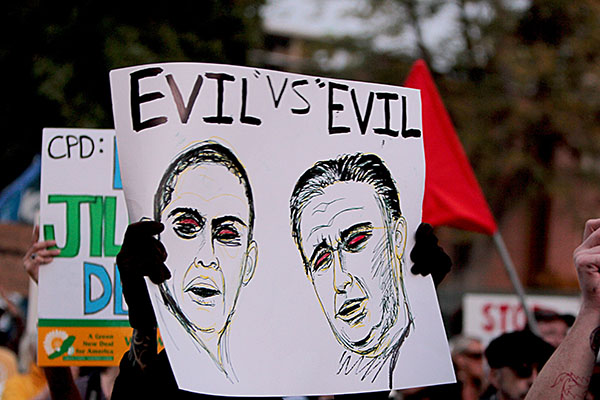 Protesters made Mitt Romney and Barack Obama out to be one in the same type of evil, and claimed our country would fail with either elected.

A seemingly genuine greeting, ersatz smiles, and an abundance of interruptions. Such characteristics could describe modern American politics as a whole. On the night of Oct. 3, Massachusetts governor Mitt Romney and President Barack Obama came together at University of Denver to have their first presidential debate. After Obama’s warm-hearted statement saying that this was his 20-year anniversary and his wife Michelle is the love of his life, the debate began. Or should I say that the age-old clash between the republican and the democrat; back-and-forth opposition and interruptions is what really began?

As I hear definite, absolute statements from both candidates, I can’t help but wonder if we’re going to look back in a few years and wonder what happened to those promises. “I will not, under any circumstances, raise taxes on middle-income families,” said Romney.  Such a promise seems like it would easily slip through the cracks under a Romney administration.

“Going forward with the status quo is not gonna cut it for the American people who are struggling,” said governor Mitt Romney in the first presidential debate last Wednesday night at the University of Denver.

Romney’s simple statement may just be the core of his campaign. I think most people agree that some things need to change, but how much and what are the disputed aspects. There is undeniably no doubt that each candidate believes that he has what it takes to get America on the path to better days. But where does that leave the majority of America? For Republicans, the easy solution might be to vote for Romney and more conservative plan for health care and job growth. For democrats, the answer is often to support Obama and his ideas to improve the education system, relieve the middle class, and ask higher-income American families to pay more taxes. “We have begun to fight our way back,” President Obama said. In essence, Obama believes that he has done things to make America better, and it is better, but he needs another four years to finish the task he started.

But as Romney points out that Obama has done nothing to improve America but has only proceeded to continue the downward spiral, I can’t help but wonder about a few things. Is there truly a definite right or wrong way to lead the country? I’m sure many of us can point out times in the past when we’ve looked at a politician and his or her administration and thought “wow, that just did not work.” But could it be that those ideals really could work, if America was in a different “state,” so to speak?

Politics has to evolve over time and conform to how the people change, and I think that’s a huge thing that both Romney and Obama haven’t kept in mind very well. If they could learn to compromise more, even during debates when they’re supposed to stand entirely firm as a democrat or a republican, I think so much more can get accomplished. US presidents often seem to think that their political viewpoints are the foundation for everything; that’s what they’re for, and that’s it. Period. The evolution of values is not a bad thing; it doesn’t indicate weakness. I believe that Obama could easily have the potential to be a good president if he could learn to be more adaptable and able to compromise. If you, as a president, especially of the greatest nation in the world, aren’t able to know the intricate details of what your opponent believes, why they do, what biases are involved, and how to compromise on things that can benefit everyone, then you should not be the president. That, ultimately, is why I do not think that Obama is doing that well in office now, and why I do not see Romney as a good fit either.

Going back to the issue of the debate last Wednesday, I don’t see a clear winner. Yes, it could be argued that Romney did a better job at speaking, but I thought he lacked poise and humility. You could say that Obama did a better job at being patient and polite, but I saw such little compromising and understanding.

I suppose that this is what makes me independent, literally and figuratively, because I find so many faults in both parties, both ends of the spectrum. I think that Obama and Romney could make a decent president if America were different. Obama and Romney should be better able to blur the boundaries on their beliefs, to better pick and choose individual values, not just an all-or-nothing set of values.