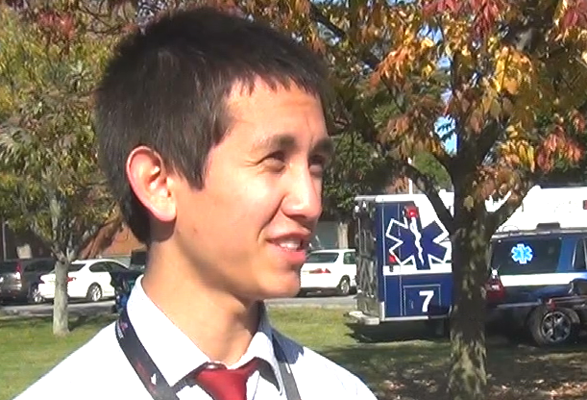 Two Manual graduates were on Centre College’s campus for the Vice Presidential debate as participants rather than spectators. WKU student Josh Beal (class of 2011) roamed Centre’s campus as a reporter for the Talisman, Western Kentucky University’s yearbook, while Centre student Nick Do (class of 2010) volunteered at a post-debate gathering held at the home of John Roush, president of Centre College.

A sophomore at WKU, Beal discovered that political views outside of Louisville were quite different than what he experienced at Manual. It’s no secret that most Manual students tend to support Obama, but Beal and Do agreed that WKU and Centre students were more likely to support Romney.

While living closely with college Republicans, Do gained a new appreciation for people with opposing views.

“It was definitely a change. I’ve felt there were many kindred spirits at Manual in terms of liberals, and here, there’s —for a liberal arts college of that size— a very sizable conservative student body, and a lot of them are my really good friends,” Do said. “The president and vice president of the College Republicans are both my fraternity brothers.”

Beal had the same experience with students in Bowling Green.

But the progressive attitudes they experienced at Manual provided Beal and Do with confidence for their views, even among a flood of Romney-Ryan signs.

“I don’t think the political culture really influences me at Western,” Beal said. “Coming from Manual and having a very strong liberal arts background has definitely helped me navigate the waters of small-town mentality.”

“As you can see, I’m wearing an Obama button,” Do said. “I’m a pretty ardent Democrat. I obviously hope Biden does a better job than Ryan. I honestly think Biden will win. He has that kind of combative nature that will help him do well against Paul Ryan.”

Here is the raw video from our interview with Nick Do.