The barrel stays in Center Hall 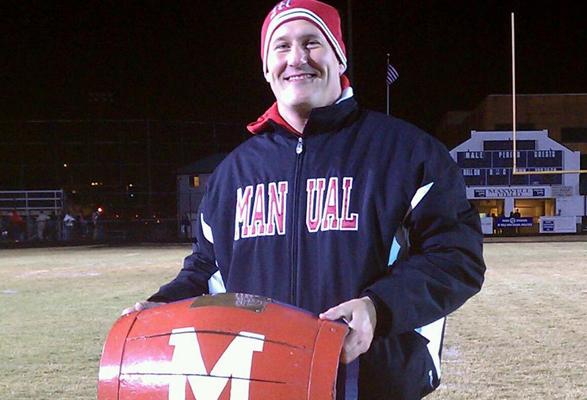 The Crimsons took down Male 24-14 with two consecutive touchdowns after struggling 10-14 for the majority of the game, bringing back the barrel for a third year in a row.

The Crimsons struggled to hold back the Bulldogs for the first few minutes of the game, but after Male missed a field goal Dishan Romine (12) was able to run the ball 71 yards for the game’s first touchdown.

Until halftime, however, it was Male who scored the points. After Male’s first touchdown, Manual could not reach its end zone in time and settled for a field goal. Manual then intercepted the Bulldogs in their own end zone. But after a short punt and a couple of first downs, Male ran the ball for a second touchdown, leaving the score 10-14 Male at the half.

“The entire crowd was pumped up, and I could tell that the team was feeding off of the energy from the crowd. I was just ready for Dishan to reel off another big run,” Breckenridge Stodghill (11) said.

In the third quarter, fortunes changed again. Manual recovered a fumble from Male and shortly after scored its second touchdown, bring the score to 17-14 Manual. The fourth quarter saw first another fumble recovery, next a holding penalty which forced Manual to punt, and then the game’s final touchdown, as Romine brought the ball in from two yards. Another interception by Manual with 13.1 seconds to go caused both teams to leave the field seconds early, the final score at 24-14. Manual had held on to the barrel.

Students were ecstatic when the final buzzer sounded. “I was getting worried when we were down 10-14 but I knew our guys could pull out the win,” Zeke Smith (11) said.

Manual went into the game with fewer wins overall. Many players credited the victory to the massive support from Manual’s fans. “I was extremely impressed with the student support of our guys. It was a really good showing,” Timothy Smith, a Manual spectator, said.

“I was relieved,” Stodghill said. “The barrel has always been at Manual since I’ve been at Manual, and it would have been really weird to not see it every day in Center Hall.”