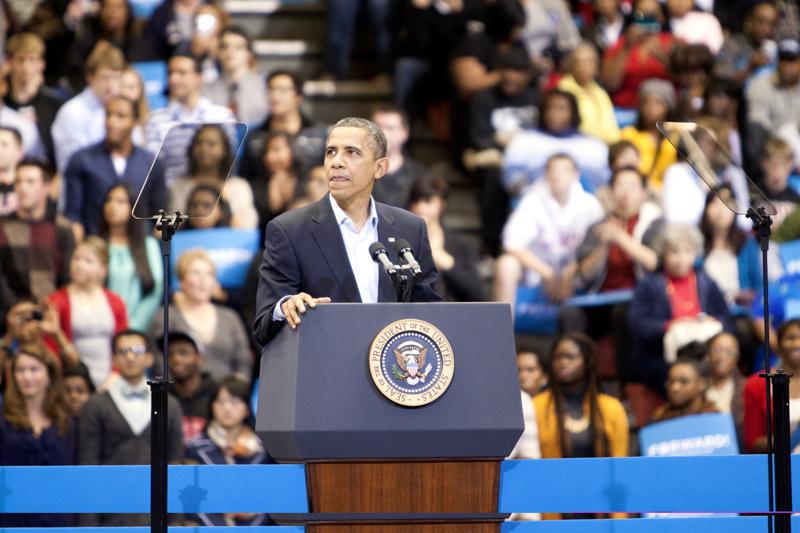 President Obama waits for the audience to calm down while the anti-abortion protester was removed by police. He repeated "It's okay" several times and re-introduced his speech after the disruption ended. Photo by Yazmin Martinez.

A constant glimmer of camera flashes rose from the sea of attendees. Cell phones and iPads rose high above the thundering crowd in attempts to capture even the slightest glimpse of the guest of honor. The crowd turned blue as “Forward” signs were waved by every hand in the Fifth Third Arena. One tie-dye banner was waved by four women, proclaiming “Thank you, President Obama!” As the President’s supporters waited, a wave broke out and circled the stadium nine times, everyone in attendance participating.

Chants of “four more years!” and “We love you, Barack!” erupted from every corner in tandem with the bass of Stevie Wonder’s band. University of Cincinnati (UC) cheers broke through the noise periodically with students in the crowd forming U’s and C’s with their arms. The cacophony was nearly overwhelming; picking out one distinct sound was impossible.

By the time President Barack Obama took the stage, everyone was fired up and ready to go.

At 8 p.m. on November 4, Obama and Stevie Wonder attempted to rally the swing state’s voters. In Ohio, 28 percent of eligible Ohio citizens have already voted, and according to CNN polls, Obama leads 63 percent to challenger Mitt Romney’s 35 percent among those voters. About 50 percent of the crowd at the rally had already voted prior to attending, leaving 50 percent left for Obama to fire up and sway in his favor. In Ohio, only 91,000 (16.8 percent) non-midterm voters have cast ballots in Republican-leaning counties, while more than 179,000 (19.4 percent) non-midterm voters from counties Obama won in 2008 have voted.

Obama began his speech with a jovial, “How’s it going, Bearcats?” and dove straight in to the topic of Hurricane Sandy’s devastation of the east coast. But he did not make it far into his speech before a protester in the top stands began shouting and waving an upside-down poster above his head. The man was able to shout for a few minutes before officials forced the man out of the arena. He attempted to stay by locking his arms around the railing, but to no avail.

The president attempted to divert the attention from the protesters by joking that they must be Titans fans angry about the Bearcats winning. Once the crowd settled back down, Obama resumed his speech and addressed undecided voters directly.

“He just cleared up a lot of the confusion,” attendee Wendell Sorrell said.

Shouts of endearment emanated from the crowd throughout the speech. Once, a shout of “we love you!” from the crowd was answered with “I love you back” from Obama.

Obama illustrated his similarities to former President Bill Clinton and Romney’s to George W. Bush. “At the time, the Republican Congress and a Senate candidate by the name of Mitt Romney said Bill Clinton’s plan would hurt the economy and kill jobs. Turns out, his math was just as bad back then as it is now,” Obama said.

The president’s appearance in Ohio attracted 13,500 attendees in the main event space and 2,000 in the overflow space, all of whom were more than excited to stand in his presence.

The UC Dean of Pharmacy, Bill Fant, and his wife, Jessie Leek, stood at the front of the stadium bleachers, leaning on the railing for a better view. “We think it is really important for the strength of the country that everyone has healthcare,” Leek said. “And we think the healthcare reform act is an important step towards that. The entitlement programs need to be addressed, but in a way that acknowledges their importance in strengthening the social fabric of our country. We’re all in this together, I guess is my thing.”

Fant and Leek had also gone to UC’s Nippert Stadium to see Obama in 2008, and they hope that Obama will keep all of his promises to better the country. Describing Obama as a “man of character,” Fant said, “I think he’s committed to doing the right thing, and I think it’s the right thing for everyone and not just a few.”

For some, the Fifth Third Arena rally was their first chance to be involved in American politics. UC student Mary Malloy was too young to vote in the 2008 election but is excited for the 2012 election. “I am thrilled to have an opinion and to have a vote and to put my money where my mouth is,” she said.

If Malloy had stayed in her home state, she wouldn’t have been able to experience anything like the rally. “I came out tonight because I’m originally from Georgia, and most Democrat candidates don’t bother coming to Georgia,” she said. “It’s really nice to feel this sense of community in Ohio.”

“Barack and roll!” Malloy added, before cheering along with the crowd.

Attendee Amber Davis came to the rally with three generations of her family. In the 2008 election, Davis voted for Obama and did so again this year. “I don’t think he had enough time (in office). I think we were in a really bad spot when he took office but I have seen progress,” she said.