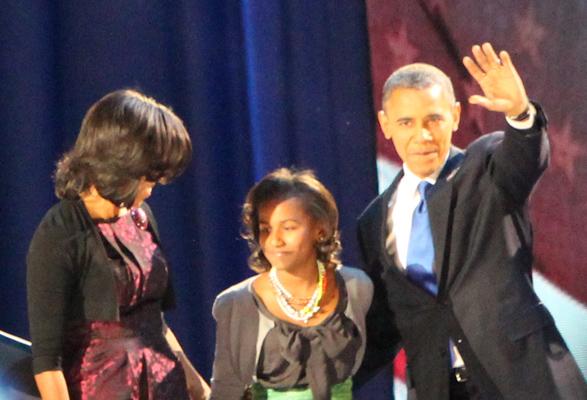 Emily McConville, Content Director
After a long and uncertain Republican primary, a widening in the polls, a narrowing after less-than-stellar debate performances, several gaffes, a hurricane, and a now-famous empty chair, President Barack Obama is projected to have won the 270 electoral votes needed to win re-election, defeating challenger Gov. Mitt Romney.

The announcement came from several news outlets after it was reported that Obama had carried Ohio, a battleground state crucial for both candidates (though more so for Romney). Obama also won Colorado, Wisconsin, and New Hampshire, three other swing states. Romney won North Carolina, a state Obama carried in the 2008 election, but in the end the challenger could not garner enough support in the key states to win the election.

Though Obama had won decisively before midnight, the election was characterized by its uncertainty. It began with a Republican primary with up to nine candidates (at one point including Donald Trump), each vying to be the nominee and constantly replacing each other as the front-runner. After murky and varied results from the early caucuses and primary elections, briefly establishing former Sen. Rick Santorum as a serious contender, Romney gathered enough delegates to become Obama’s official challenger.

As the party conventions approached, both candidates made their cases and established their visions for the nation. Romney advocated for smaller government, more aggressive and defined foreign policy, and repeal of the Affordable Care Act, while deflecting accusations of shifting on issues and actually inspiring what came to be called Obamacare. Obama advocated for higher taxes for the wealthy and the continuation of his healthcare reforms and foreign policy while deflecting accusations of mishandling the economy. Romney chose Paul Ryan, well-known for his budget plan and his ideological conservatism, as his running mate.

The campaign became uglier as Election Day got closer, driven in part by unprecedented campaign spending, legalized by a Supreme Court decision allowing the existence of Super PACs. The Obama campaign attacked Romney’s gaffe-ridden foreign policy trip and his tenure at his venture-capital company Bain Capital. Romney retaliated with further accusations that Obama would regulate the private sector to the point of strangulation, and that he was not doing enough about Iran’s progress towards nuclear capabilities. Even so, Obama led in the polls, and the gap between him and the former Governor of Massachusetts widened in the weeks leading up to the first presidential debate.

That was when events began to turn in Romney’s favor. Romney was widely considered to have won the debate at the University of Denver, after his aggressive performance and Obama’s lackluster one. The President was more assertive during the next two debates, but he never regained his commanding lead — though Obama had the electoral vote advantage, the polls in many of the swing states were within the margin of error of three points.

As is the case in most presidential elections, the race came down to a few key states. Ohio received much of the media attention and political ads, and all eyes were on Florida, Virginia, North Carolina, Wisconsin (fresh from a recall gubernatorial election), and, to a certain extent, Colorado and Nevada.

Days before the election, the largest hurricane ever recorded slammed the East Coast, killing dozens, cutting power for millions, and shutting down businesses — and polling places. Officials scrambled to mitigate the damage, expanding e-mail and absentee voting opportunities and relaxing rules about polling locations. Still, the damage did not seem to hurt the mostly-Democratic northeastern states, which Obama won easily.

In the end, Ohio was one of the last states that helped Obama reach the 270-vote threshold, ending a long and uncertain campaign.