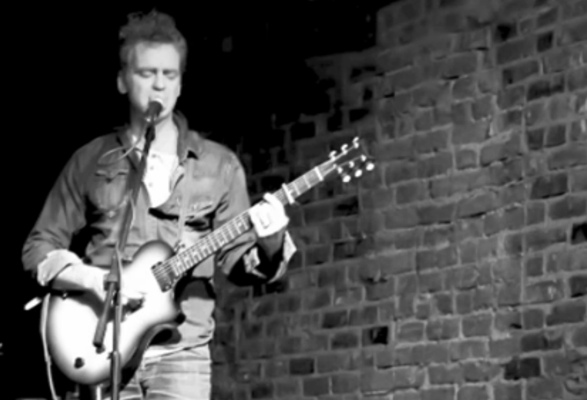 Jakob Felty interviewed acclaimed musician Sean Hayes before his concert at Uncle Slayton’s. Hayes was on tour for his seventh and newest studio album, “Before We Turn to Dust.”

Overview: Sean Hayes’ newest album, Before We Turn To Dust, provides a bit of a stylistic gap from his prior album Run Wolves Run. But this isn’t necessarily bad; just different. As an avid fan who has all of his works I expected to like the album–which i did–but, I was surprised at some things. The album features prominent blues/soul influence and an obvious demonstration at the wide variety of instruments at his disposal while producing the album. In an interview I did with him he expressed that having the piano as a primary instrument was a lot of the difference. I would have liked to have seen more soft, romantic acoustic pieces like “Garden” or “Powerful Stuff” from his previous album but I was pleasantly surprised with bluesy, intimate takes on life and recounts of his personal life like “Lucky Man” or “Drop Down.” The 8th studio album by Hayes is a good change of pace that he is happy with.

The Different: What was a change from the band’s usual style?
TRACK 3: Bam Bam
Featuring a different side of Sean Hayes is the track “Bam Bam.” It reveals a sexual topic not yet explored very far by Hayes. To show a more “bad” side too him with the accompaniment of the Blues style is a cool new feel that is promising for the future.

The Future: What do i hope to see more of in the future?
TRACK 10: Innocent Spring
Sean Hayes voice harmonizes AMAZINGLY with a higher pitched, female presence. To get more features on songs would be fantastic. I hope to see this in future works.

The Bottom Line: Sean Hayes is bold, experienced, and keeps producing good music. I expect to see a lot more work from him when it’s all said and done.