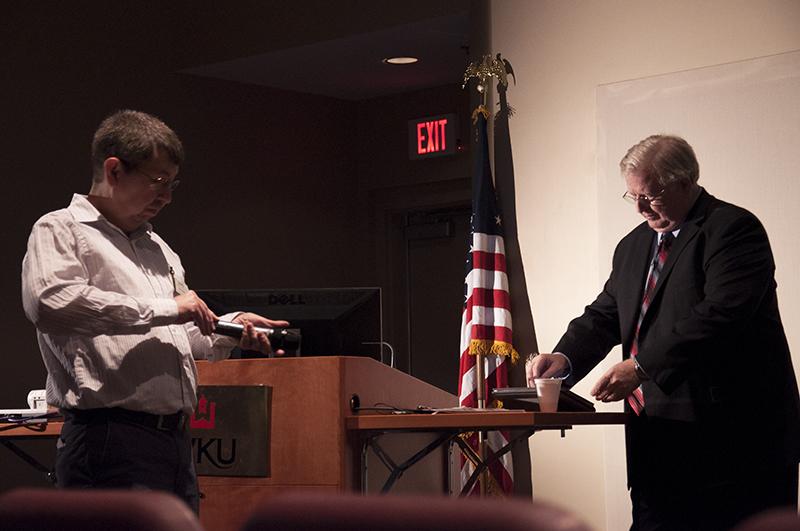 On Nov. 30, Gene Policinski, a veteran journalist and the Vice President of the First Amendment Center, came to speak at Journalism Scholars Day at Western Kentucky University in the MMTH Auditorium.

Policinski talked about the First Amendment and why it is essential to Americans. “It’s the amendment that defines who you and I are,” he said. Policinski stated that the First Amendment is like a roadmap for the government to fix or eliminate the Articles of Confederation, which was seen as problematic. “People of that time said that we needed a stronger central government, and the Bill of Rights expressed our basic core freedoms,” Policinski said.

The first amendment doesn’t just have five freedoms, he said. In his earlier years, one of Policinski’s mentors told him that he would find out there were seven. The first of the five freedoms, freedom of religion, has three parts to it. The first part of it is that everyone has the freedom to freely exercise the religion they choose. The second part is that there cannot be any government establishment of that religion, which means that there cannot be a First Church of the United States. The third part is that you are free to not believe in any religion. “People seem to forget the last one because most people in the United States have chosen to be religious,” Policinski said.

Later in his speech, Policinski named the rest of the five freedoms, but the freedom that was most discussed was freedom of speech. He spoke about how there was a high school student in the Northeast who wore a T-shirt with President Bush on it to school, which came off offensive. When it was brought to court, the student won the case because the judges thought he was using his right of freedom of speech. The judges said that it may have been offensive, and disrupted the teacher’s classroom, but it was a political statement so it was allowed.

Policinski also talked about social media like Twitter and Facebook and how they have both helped and discouraged society when it comes to news. “This is the most exciting time to be a journalist, because you have so many other ways to develop news,” Policinski said. On Twitter and Facebook you can post and tweet anything, and it can be shared around the world. This has had both good and bad outcomes. “The potential to misinform your reader is just as fast,” Policinski said. “The government can’t stop you from saying anything you want, but they also can’t stop the effects of what you say.”

Policinski is a fan of journalists being truthful to their readers. “As a journalist, it is essential that you tell the truth and do you best to be a protector of the First Amendment,” he said. The main focus of his speech was to inform the students that it is important to stay true to the changes that we have today. Teenagers have more of an advantage to publish and post their ideas, pictures or comments, and he stated that as journalists, they should take advantage of this entirely.