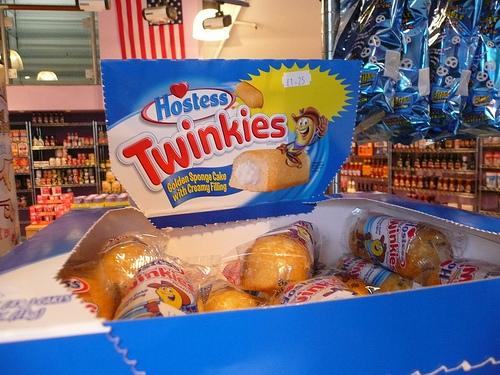 Hostess Brands Inc. announced on November 21, 2012 that they were approved to start winding down its business and sell its assets. When the general public found this out, they started complaining about losing the Twinkie and other Hostess products. The general public didn’t care about the jobs being lost and how it happened, just that they were losing the ever popular Twinkie.

Every time the media would interview the general public about Hostess closing, they would just whine about losing the Twinkie. I for one am tired of hearing people complain about something so trivial. Products go in and out of the market all the time, so deal with it. Anyway, Hostess has buyers interested in purchasing the rights to Twinkie, so it will probably be back on the shelves soon.

The real issue is how this happened and the employees losing their jobs. There are 18,500 more people that are now out of a job or soon to be out of a job. According to the Hostess website, Hostess “intends to retain approximately 3,200 employees to assist with the initial phase of the wind down. Employee headcount is expected to decrease by 94% within the first 16 weeks of the wind down. The entire process is expected to be completed in one year.” So, if there are 94% fewer employees, an estimated 17,390 will be out of a job within the first 16 weeks of their wind down.

That leaves me to wonder how long the “initial phase of the wind down” will last. If 17,390 people lose their jobs in the first 16 weeks, that leaves 1110 employees to work on the wind down. So did Hostess fire 15,300 employees as soon as they shut down and will then fire 2,090 people after 16 weeks? Well, the Hostess website doesn’t state that information, maybe because it might make the company look worse.

There is something that I found somewhat humorous on the Hostess website and that is the paragraph that stated who they blamed for their failure. “Hostess Brands worked tirelessly to complete a reorganization of its business as a going concern, including spending the better part of 18 months negotiating with its key constituents to obtain a consensual agreement to lower costs to a sustainable level. The Company had obtained the support of its largest union, the International Brotherhood of Teamsters, and its lenders. However, the BCTGM leadership chose not to negotiate a new labor contract and instead, when presented with a final offer, launched a campaign to cripple the Company’s operations and force it to liquidate.” This is just a huge load of crap.

The Bakery, Confectionery, Tobacco Workers and Grain Millers International Union, or BCTGM, sent out a press release on November 13, 2012 addressing this. The members rejected the proposal by 92% which was created to “lower costs to a sustainable level,” which means cutting back on workers’ pay and benefits. Companies have done this before and been successful in doing so but that is not the biggest issue. Hostess wanted to cut back on workers’ pay and benefits but decided to raise the pay for the executives. According to the November 13th union press release, “BCTGM members are well aware that as the company was preparing to file for bankruptcy earlier this year, then the CEO of Hostess was awarded a 300 percent raise (from approximately $750,000 to $2,550,000) and at least nine other top executives of the company received massive pay raises. One such executive received a pay increase from $500,000 to $900,000 and another had a change of $375,000 to $656,256.” So, the way to “lower costs to a sustainable level” is to screw over the hard working blue collar employees and raise pay for the executives.