The mascot brawl: what really happened 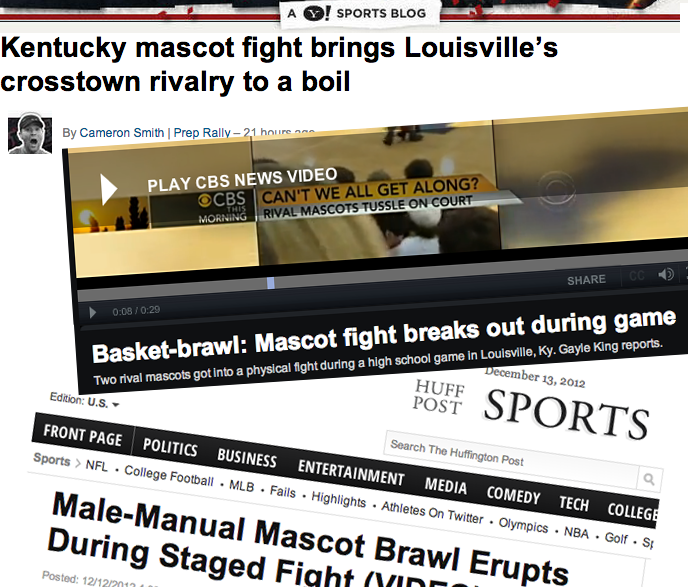 On Friday Dec. 7, during the Manual/Male basketball game, a playful halftime fight between the two teams’ mascots led to Male students rushing the floor and ended in students outside fighting. A RedEye video of the mascot fight increased confusion.

“It’s a Male-Manual rivalry, and I could kind of see it coming,” said Jake Sloan, the Manual mascot, “but it wasn’t an intentional fight, because I knew the other mascot and we are friends.”

“It was just something to get both student sections hyped,” Sloan said.

When the clock ran out, Manual had lost 63-45. Male students rushed the floor again and started throwing plastic bottles and other objects at the Manual student section.

One of Male’s basketball players also tried to attack one of Manual’s players when the game was over. Manual’s coaches tried to stop one of the students from fighting back. “We were all talking bad to each other, and one of their students tried to come up to us, so we tried to defend ourselves,” said Trey Boyd (11).

“I didn’t see Male’s players do anything that was inappropriate because I was in the front of the postgame handshake line,” said Coach Just.

After the game, Male and Manual students spilled into the parking lot, where the fight picked up again. “We walk out, and there is 10 feet of room between the two gates from the parking lot, with students blocking the gates,” said Dishant Chhabar (12). “We all just huddled in a big group and tried to push through the crowd, which someone got pushed, and that’s when it all the violence started. Next thing I know, some guy punches this girl in the face, and she runs away. Then a couple of minutes passed and another girl got hit by a guy, and some other guys jumped him. It was just a lot of fighting going on.”

The fight wasn’t the only thing that upset students in the stands. “I wasted my money because we lost, and there was too much chaos going on at this basketball game,” said Cheyenne McCall (11).

“I’m glad I left early because if someone hit me I would have been really upset,” said Male senior Rhiann Fleming.

“I can’t believe that students would resort to fighting over a silly game. It doesn’t get that serious. Something should be done about this,” said Rachel Hurrigan (12).

A RedEye video was posted that night but taken down on Monday because it was causing confusion among students who didn’t attend the game. “There are disciplinary issues involved, and as a school, we can’t broadcast or report when students are breaking the law,” said Manual principal Larry Wooldridge. “When someone fights in the hallway, you can’t record it.”

Local TV station WHAS, however, obtained the footage directly from the YouTube account of Michael Brewer (12). By Wednesday, Yahoo, the Huffington Post, The Daily Mail UK, and most recently ESPN and CNN posted the video to their sites.