YPAS cast of MacBeth heads to the Southeastern Theatre Conferece 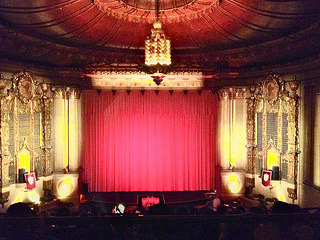 The Southeastern Theatre Conference is a non-profit organization and the largest regional theatre convention in the United States. The convention rarely visits Louisville, so this is a big opportunity for YPAS to showcase their students’ talents. “I’m delighted to show professional theatre companies, colleges, and high schools how talented and invested our students here are at Manual / YPAS,” Ms. Georgette Kleier (Theatre) said.

Macbeth: The Essential Action cast visited the University of Kentucky to perform at Act One Theatre and was named the Best High School theatre performance. By winning this state competition they qualified to compete in The Southeastern Theatre Conference competition. Not only did the cast win Best High School theatre performance, Curtis Lipsey (11) and Chandler Dalton (12), who play Macbeth and Lady Macbeth, won Best Actor and Actress respectively. “I was so proud to be a part of this cast. That moment meant so much to me, because we put a lot of work into this play,” Curtis Lipsey (11) said.

The mixed cast, which consists of YPAS theatre majors and others, are more than excited to go to the convention. “Once I researched what the SETC was, I was overwhelmed with my cast and I’s opportunity to be a part of this conference,” Tyler Chandler (12) said.

Having set the standard high for themselves, the cast has to put in a lot of work. Ms. Kleier isn’t going easy on the cast when it comes to practice, but she has faith in her students to perform exceptionally. Starting February 18th, the cast will practice every day of the week from 3 to 5:30 after school. “Though we’ve done the play so many times, I appreciate being able to revisit a piece of theatre and find new things about the play that make it what it is,” Jordan Bride (12) said. “Practicing the play extensively only makes the play better for us to perform and for our audience to watch.”

The performances here at Manual, their win at the Act One Theatre, and the opportunity to be a part of this conference has left the cast excited and grateful. “I expect us to do exceptional in this showcase,” Chandler said. “I am very proud of the cast. I expect nothing less than good for us – you’ll just have to keep an open ear about the results.”