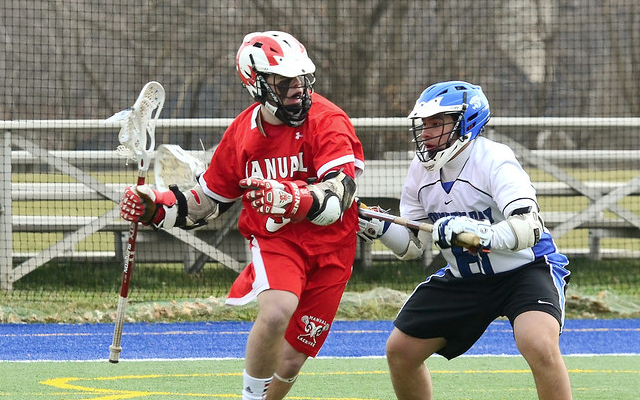 Yesterday, the varsity lacrosse team played their first game of the season against the Kentucky Country Day (KCD) Crusaders at KCD. The team won their season-opener with a score of 12-8.

Ben Speelman (11, #19) scored the first goal on a fast break putting the Crimsons in the lead for the rest of the game. With that first goal came a roar of excitement within the team that held through and helped the Crimsons to victory. Along with the boosted moral, according to the coach they did just what they practiced. “I hope they see how the phrase ‘Play how you practice.’ can work to our advantage throughout the season.” Said Devin Clifford (Coach).

The forecast called for thirty degree weather, a breeze, and snow. These harsh conditions brought no boundaries for either team as the players continued to hustle and fight through the cold. Although the Crusaders pushed to prove themselves as a formidable opponent for the Crimsons — decreasing the lead from time to time — Manual proved to be the stronger as they held a more than two point lead all sixty minutes. In fact, Manuals coach, Clifford, felt so confident that he had a win on his hands that in the fourth quarter he allowed the backup goalie to play “Just for fun.”