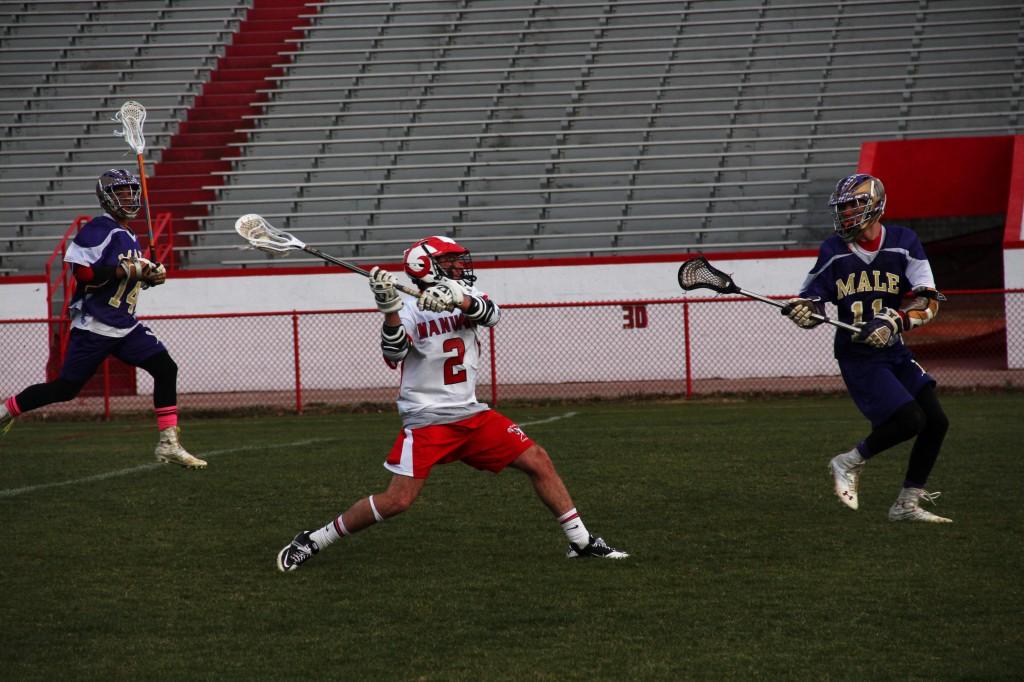 #2 (Greg Healey) takes a shot on Male's goalie while Male continue's to try and block the shot.

On Wednesday, March 20, the Manual boys lacrosse team hosted the Male Bulldogs in the 5th annual Male/Manual boys lacrosse match. The Crimsons defeated Male 13-5 on the frigid March evening with temperatures dropping lower than 28 degrees. Players on the sideline were eager to get in the game so their muscles could get moving and they could stay warm.

The game began with Manual’s Thomas Hutto (12, #4) winning the face-off followed by Male gaining possession of the loose ball. Male failed to get on the board and turned over the ball in under 4 minutes. Hutto scored the first goal of the game, setting the crowd and sidelines into thunderous applause. After another manual goal, the Bulldogs stepped up and tied the game in the first quarter and in the second, took a small lead over the Crimsons.

During halftime, the Manual team must have received a more than encouraging speech from Devin Clifford (Head Coach) because in the start of the second half, Manual brought the game back to a tie within forty seconds as Hutto and Greg Healey (11, #2) scoring back to back goals. From there, the Crimsons had enough energy to steal the game from Male as the Bulldogs never scored another goal for the rest of the game.

Click on this link for a gallery of the game! https://www.manualredeye.com/2013/03/26/gallery-male-vs-manual-varsity-boys-lacrosse-game/