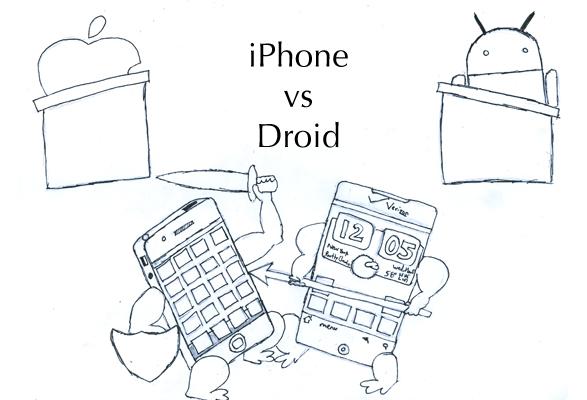 Clara Campeau shares her opinion on the technology war between iPhones and Droids.
Although I am not much of a technology person, I am aware of the growing smart phone phenomenon, but who isn’t? I have definitely heard the overplayed, “What, are you stuck in 2009?” joke that goes along with having an average yet well functioning phone that doesn’t offer more advanced computing ability and connectivity than a contemporary smart phone.
Despite internet connection, high mega pixel camera, high resolution display and responsive processor, there seems to be a lingering competition between the two biggest names in the network, rather than smartphone vs. dumbphone, it is now iPhones vs. Droids.
Many factors that come into play in this heated battle concern display, size, weight, storage, processor and the operating system. Although the two look different on the outside, there are a lot more similarities that one might overlook.

Both phones have phenomenal display, but for those who enjoy a larger screen, the Droid X takes the cake. However, the iPhone uses Retina Display technology that allows for higher resolution as well as IPS technology, which means the iPhone performs better in sunlight.

Another characteristic that directly corresponds with ones taste is the size and weight of a phone. Although Apple stated their iPhone 4 is their thinnest smartphone yet, the difference is almost unnoticeable. Connectivity options are both very similar, which do play a huge role when selecting a smartphone. Storage is another issue concerning each phone. The $200 Droid X comes with 8GB storage along wtih a 16GB memory card, comparable to the 32GB version of the iPhone for one hundred dollars more. Although both phones are highly specialized and incredibly useful, I believe the competition will always be settled by consumer preference rather than actual data. Each phone is taking modern technology to a new level, while both companies are working to expand their technology each and everyday. Either way, each phone has multiple advantages. Despite these alluring advantages, I’m going to be stuck in 2009 for a while. A smartphone user once said to me, “I used to have an iPhone and I broke it so I had to use my old phone that was so old. It was like switching from a Ferrari to a horse drawn carriage.”
Delete Image
Align Left
Align Center
Align Right
Align Left
Align Center
Delete Heading