Light turnout at Back to School Dance 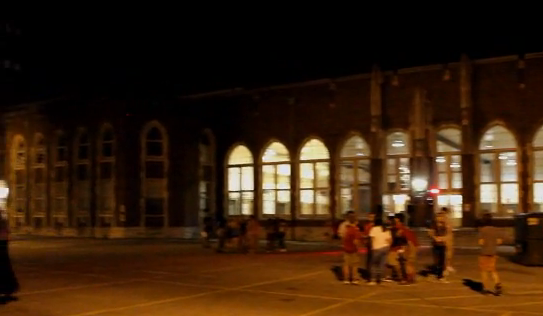 The first back-to-school dance was held last Friday after defeating Central High School 17-7 in the first home football game of the school year. The dance, held in the courtyard parking lot and sponsored by Executive Council, is supposed to be an opportunity for students to hang out with friends and for freshmen to get acquainted with each other.

Katie Brown (HSU, 9) was both excited and nervous to attend her first dance at Manual.

“At Noe we had a fall, spring, and winter dance. Those were really fun. I’m hoping some fun people show up to this one, but I also hope no one does anything stupid,” said Katie early in the evening.

Last year’s unsupervised dance at the start of the school year went poorly in the eyes of the administrators, but assistant principal Matt Kingsley had higher hopes for this dance.

“I came from the game, and it was great. The dance is the same every year. It’s slow at the beginning and then the football players show up and the rest of the crowd from the game,” Kingsley said.

“My first Manual dance has been awesome, there are so many people and everyone is really friendly. I plan on dancing too, they just haven’t played my song yet,” Crush said.

According to Executive Council, this year’s DJ had never before been used by Manual, so no one knew what to expect from the music selection.

“It’s better than last year’s, cause it was in the gym then and everyone was really hot and sweaty,” Newman added.

“Last year I went and dressed up like a cowboy and arrived 45 minutes early, so this has to be better,” said Emilee McCubbins (HSU, 10).

Unfortunately, the high expectations for attendance were not met.

“I don’t think there was enough advertising for it,” said a member of Executive Council who refused to be identified by name. “You didn’t really get a good notice. It was like the first day of school and you were like ‘wait, there’s a dance on Friday?’.”

“Well, in all honesty, I never have been to a back to school dance. The only school dance I’ve been to is spring homecoming of my sophomore year. I’ve never gone to the back-to-school dance just because my freshman year was really weird and I obviously hadn’t found my ‘niche’ at Manual because it was only my first week there, so I didn’t have a solid friend group to accompany me. I also hear from multiple sources that the back-to-school dances at Manual are super awkward, and it’s best to wait for the nice dances like prom so you can leave with a good dance experience,” said Max Duvall (J&C, 12).

Some students compared the back-to-school dance to middle school dances.

“I personally have never gone to a back to school dance just because I’m not really into that kind of thing,” said Emma Percival (J&C, 11). She also said that they seemed too much like middle school dances and pointed out that one was even held at Noe Middle School.

Mr. Kingsley’s assumption that the football players would show up later and bring a large crowd from the game also proved to be false.

Many students said that they didn’t attend the dance because of the heavy amount of chaperoning, which is Manual’s method of dealing with inappropriate dancing.