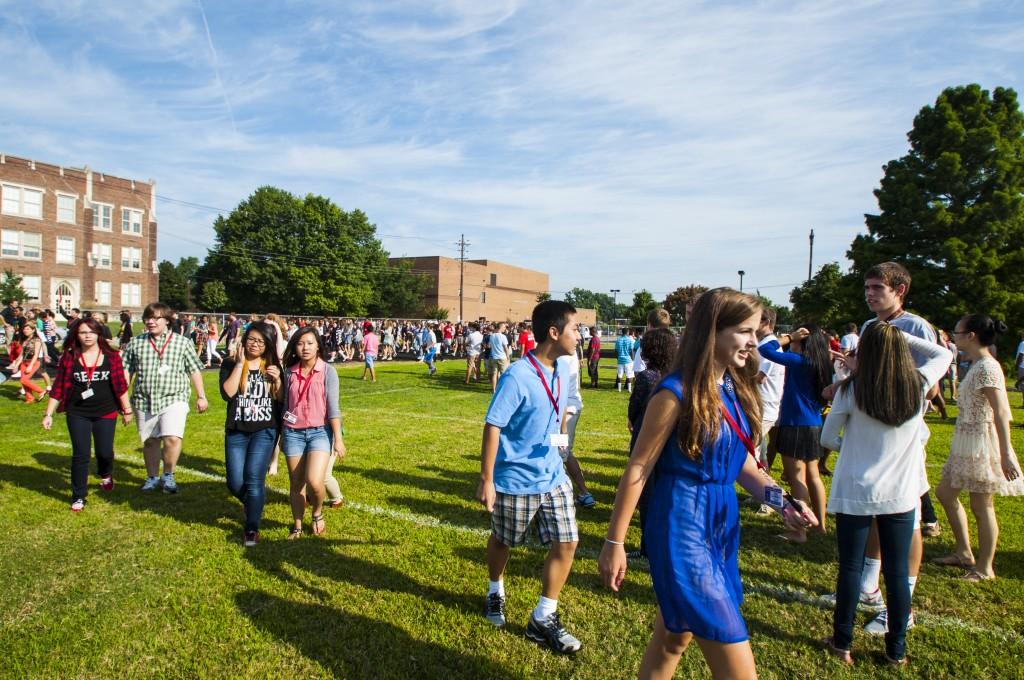 The still blazing, Summer heat beats down on students as they stand in the field. Photo by Jack Steele Mattingly

There was a new schedule implemented for the first two days of school this year. The schedule included cutting classes to 20 minutes each, expanding homeroom to a total of eight hours over the two days to allow state mandated safety drills to occur.  The changes were made to reduce wasted class time throughout the school year, according to new principal Jerry Mayes.

“The disruptions made it difficult to establish routine, expectations, or pacing.” said Williams,  whose classes were interrupted quite often throughout the first few weeks over the last several years.

Some students didn’t think the new schedule was an improvement. “It doesn’t feel like a real school day, and that’s because it’s not,” said Elijah Bauer, (11, MST). “It’s just really confusing. I understand why they did it, but it just seems like a hassle for students and teachers.”

“Classes were so short the teachers had no time to explain anything in detail and we had no time to ask questions,” said Ryan Tarr, (9, HSU). “There was plenty of free time in homeroom which could have been used for extra time in each class.”

During all lunch periods students not eating lunch were idle in home room. There was also substantial empty time at the beginning and end of the day.

Other students were in favor of the new schedule.

“It was very interesting. It was confusing and difficult at first, with the fire drills and all. But after awhile, it got easier. I think it was a good idea to get the drills out of the way,” said Will Ringenberg, (11,HSU).

Williams responded to the criticism of the new first day schedule by explaining to students that they should wait before they offer such criticism. “Yes, there may be some wasted time on the first two days, but the benefit is that there will be no interruptions afterward.”

Williams also said that the reason for all the empty time the first two days of school was because of a new principal being instated. There was very little time to discuss a plan with him. She explained that, if the new first day schedule is used again next year, the staff will find something to fill the empty time.