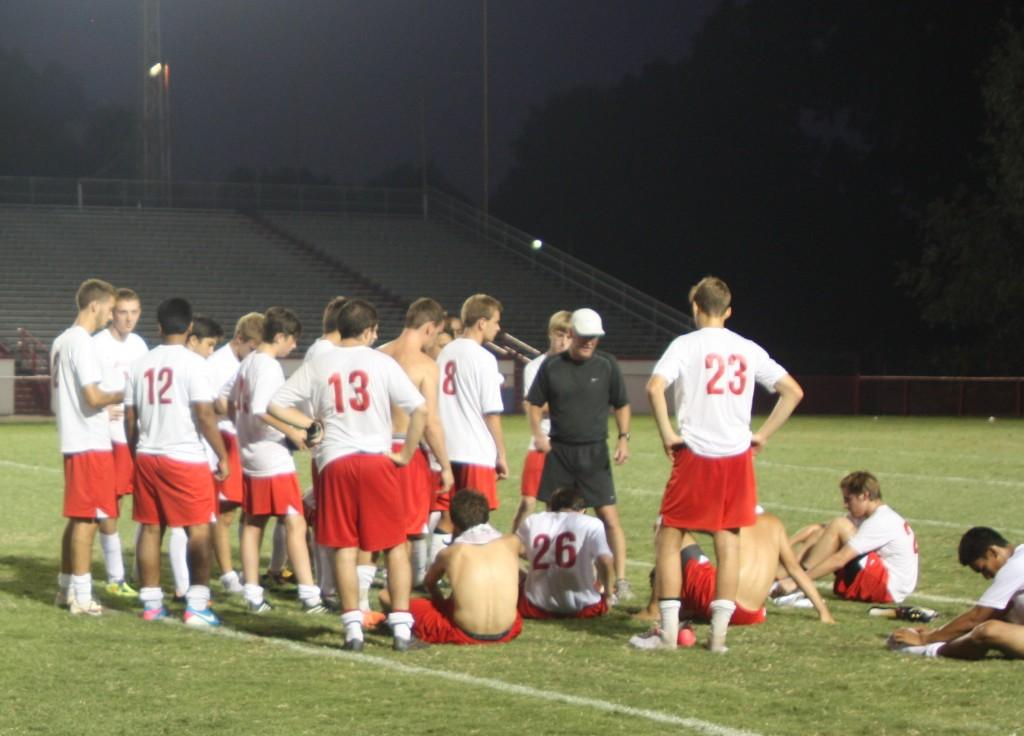 Yesterday, August 27, Manual Boys Soccer hosted Christian Academy of Louisville (CAL) for the Crimsons first regular season game of the year. CAL ended up taking the victory, 3-2, in an ending that most considered quite unjust.

The game was under way and for the majority of the first half the score remained tied at 0. After about fifty minutes of play, senior defenseman Connor Shea headed in a corner kick from Riley Hook (10) for the game’s first goal.

“I’m usually not one to be scoring goals considering I’m the last guy on defense but sometimes I take set pieces on corner kicks and Riley’s ball was kicked perfectly so I was able to score,” Shea said.

After the Crimsons first goal, they began to loosen up. Shea once again headed in a corner kick to make the score 2-0 in Manual’s favor.

“After the second goal its normal to get happy but you’ve got to remind everyone to stay focused and prepared for the other team to bounce back,” Shea said.

CAL bounced back from Manual’s second goal and was finally able to find the back of the net. The score is now 2-1 and a little closer than Manual would have hoped. Ten minutes remain in the second half.

Manual succeeded in holding off CAL’s run for about nine minutes until a major turning point in the game.

CAL had the ball deep in Manual territory. A CAL forward tried to pass the ball to his teammate but Manual’s goalie, Andrew Hagan (10), slid in to secure the ball. The CAL forward slid into Hagan knocking the ball loose along with gashing Hagan’s left eyebrow with his cleat.

“There were so many fouls that didn’t get called in that play. Knocking the ball out of the goalies hand alone isn’t allowed, not to mention kicking the goalie in the face,” Hagan said.

Despite arguing from Manual’s players, the call stands and the score was now tied at 2-2. Senior Greg Healey replaces Hagan in goal for the remaining minute. CAL now has all the momentum.

“After that play we were all very frustrated and flustered. We didn’t recover as well as we should’ve,” Hagan said.

Their frustration resulted in loss of focus and another goal by CAL with 27 seconds left. Manual couldn’t tie it back up and CAL wins 3-2.