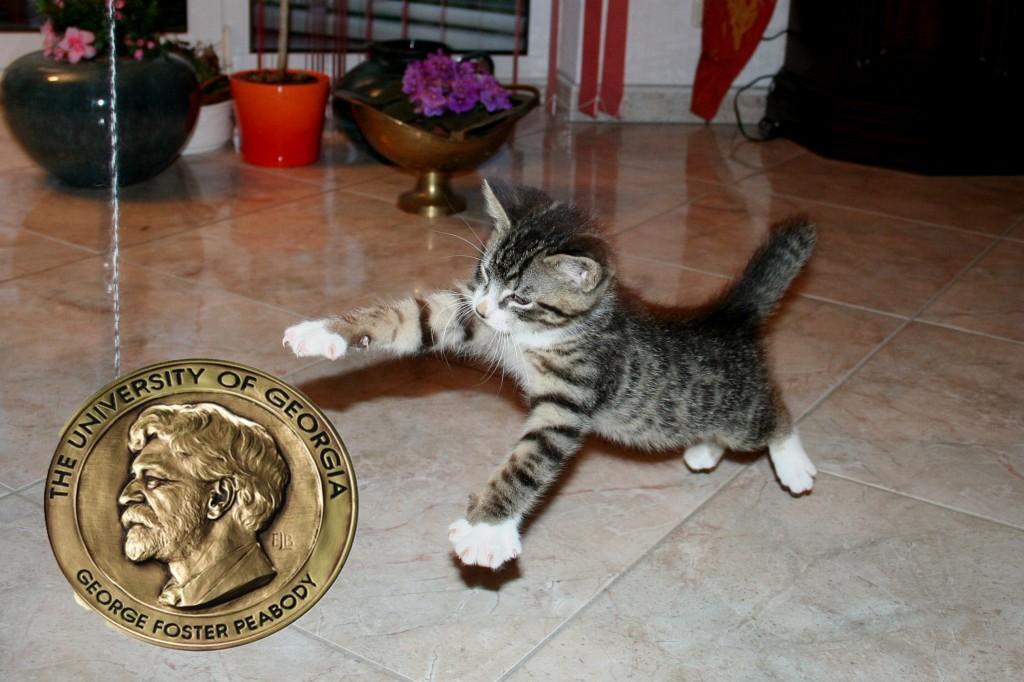 Last Saturday, Louisville’s WAVE 3 News co-anchor Scott Reynolds stood upon the stage in tears as he humbly accepted his first ever Peabody Award for his investigative piece on the viral video “Kitten Tries to Say ‘Hello’.”

This is the first time a news station from Louisville has ever won a Peabody, a national award named after George Foster Peabody, that recognizes public service radio and television stations for their meritorious work in the field of journalism. Peabody Director Jeffrey Jones said watching the news story made him happy, which was “pretty cool.”

“It really took my mind off the depressing situation in Syria, which is pretty cool,” said Jones. “It’s the kind of stuff the citizens expect to see out of any news outlet.”

According to Jones, Peabody had kept an eye on WAVE 3’s investigative viral video work for the past couple of years, from that one ginger kid to the kid whose parents ate his Halloween candy. The kitten video, however, was enough to make Peabody see that they deserved an award for their work.

“It has always been a tradition to spend at least five minutes of our news hole talking about interesting stuff found online,” said Reynolds, while cradling his Peabody in his arm. “I didn’t think my hard work of making our viewers momentarily smile would pay off with an award like this. If there’s one thing WAVE 3 does, it’s obeying one of the six principles of journalism: making the interesting important. That’s the one, right?”

The story aired last July at the very end of a six P.M. news segment. Reynolds and co-anchor Shannon Cogan teased the video for the entire half-hour, keeping the audience in constant suspense. After several Wal-Mart and KIA Store ads, it was time.

“Well this is not something you see everyday; take a look at this Shannon, it’s an adorable kitten who thinks he can speak,” said Reynolds in the story.

“Oh, watching that almost gave me a heart-a’cat,'” said Cogan, followed by several seconds of awkward laughter and another KIA Store ad.

“It’s pure beauty: the way WAVE is able to commentate on such stories in an energetic fashion,” said media expert Vince Wise. “And the advertisements are pretty cool too.”

“Kitten Tries to Say ‘Hello’” currently has over 10,000,000 views and 600,000 likes on YouTube. Mittens, the kitten in the video, was astonished by how fast he had grown into an internet celebrity, which he believes is mostly due to the WAVE 3 story.

This is a satirical article and is intended to be read as such. It is not meant to be taken seriously.