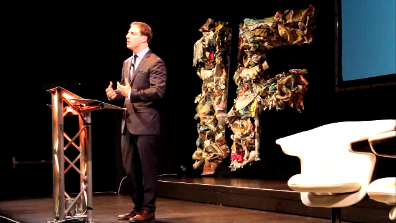 Magician and journalist Alex Stone explains how magic is incorporated into science and our every day life.

Alex Stone with Magic and Neuroscience

Imagine a room filled with 720 people, completely silent.
This was how Idea Festival 2013 on Wednesday, Sept. 25 began, as part of a meditation exercise in a presentation by Maria Konnikova.
Soon after at 10:30 am after a 30 minute intermission, magician and journalist Alex Stone gave his presentation about perception and the occurrences of magic and manipulation in our community and lives.
“[Magic] shows us that our mind lags behind reality by a certain definite amount – and it may not even be continuous; it may even be that our mind is a series of discrete events that only appear continuous after the fact, much like a film,” Stone said.
After his introduction he invited an attendee onto the stage to use her in a card trick. After the trick, a ‘was this your card?’ type illusion, he let her off the stage – but not before handing back her watch, which he had taken five minutes before as she stepped on the stage. He then explained to the audience how he did it, a practice he said was not generally condoned by other magicians.
“I believe that the secrets of magic are almost as interesting – if not more so – than the tricks themselves because of what they tell us about the human brain. It takes us up a path, leading us with our knowledge and assumptions – then turns them against us.”
Stone began his magic career at age 5 with a kit he got from his father. He went to high school, and then moved to New York City – beginning his professional ventures in the field. He both studied psychology and practiced magic, leading him to his future as a journalist and member of The Society of American Magicians.
“I was getting paid to be a grad student, studying psychology and physics. And I tutored. I love physics because nature in itself is so magical. Particles pop out of existence and pop into existence, tunnel through objects – the mysteriousness of that really interests me. Magic is an entry point to understanding how the world works.”