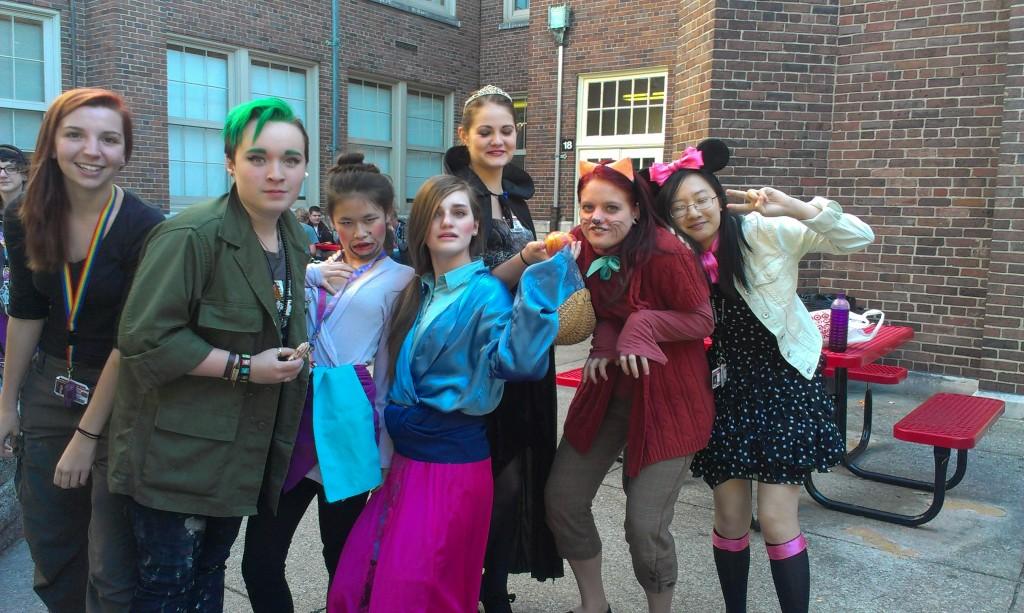 It was probably easy for most people to recognize Cinderella or Buzz Lightyear, but it takes some more thinking to recognize Aboo from Aladdin or Kim Possible.

Disney Day, a new addition to Manual’s themes for Red/White week, was a chance for even the most casual of fans to show their Disney spirit. Freshmen Lucas Neuteufel and Henry Jelsma were dressed as Phineas and Ferb, even dying their hair orange and green, respectively.

“He texted me and said ‘Hey, let’s be Phineas and Ferb. That would be sweet; that would be swag,’ and we are so dope that we did it,” said Henry Jelsma (9, HSU).

“I’m dressed as Jack from ‘Nightmare Before Christmas’,” said Breya Jones (10, J&C). “I’m really happy that they included Disney Day because I love Disney movies, and seeing all these people dressed up as Disney characters is really cool.”

Some people’s costumes were extremely elaborate, such as Jack Grossman’s (10, J&C), who went as a plastic green army man from “Toy Story”. “I can’t even go to the bathroom in this,” Grossman said.

Even school custodian Bo James dressed up. “I’m Aboo from Aladdin. I already had a monkey suit from Costume Day last year, so it was pretty easy to cut up a t-shirt and put a cup on my head,” James said.

Bella Lawson (10, VA) and Emily Wang (10, VA), planned to correlate their costumes. “I’m the matchmaker from Mulan because I wanted to draw a beard on myself,” Wang said.

“I’m the Mulan to her matchmaker because I also wanted her to be able to draw a beard on herself,” Lawson said.

Click here to view a Storify from today and be sure to check our Red/White Week page for frequent updates on this week’s events.