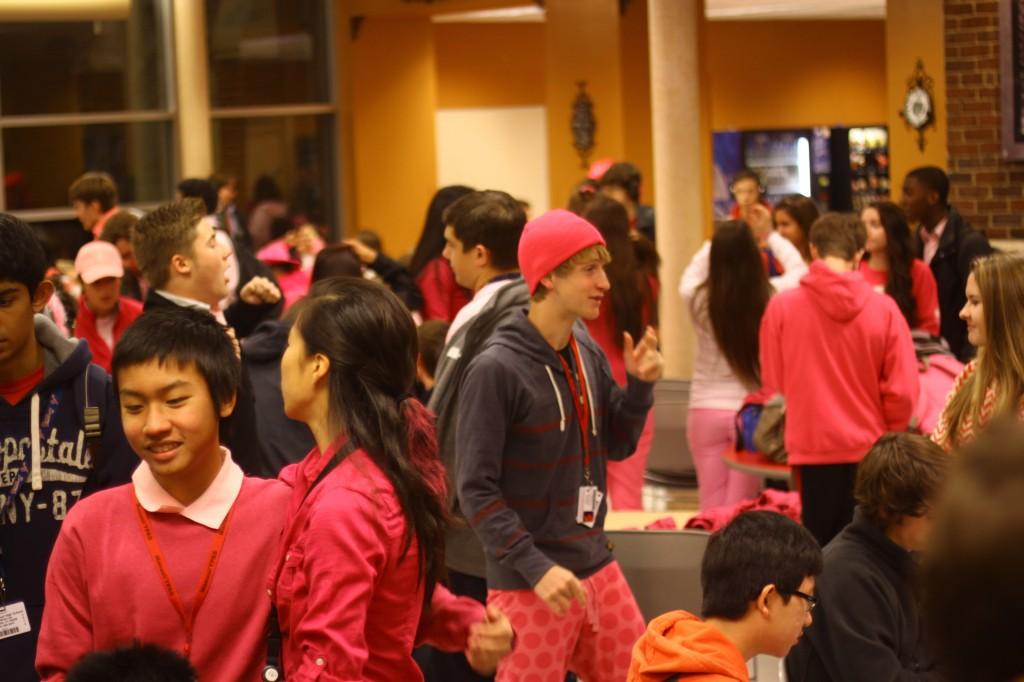 Senior cafeteria starts to get crowded with a lot of pink.

Today, Manual students participated in a pink-out day for breast cancer awareness, a new addition to the Red/White week festivities.

Deciding for themselves how best to engage, students participated with various levels of involvement and effort. Some, like Steffi Taylor (10, HSU), simply chose to wear a pink top and jeans. “I like that we have a spirit day that’s more low-key,” she said. “It’s easy enough for pretty much everyone to do, so there’s a bigger population of people who participate.”

Others opted for more elaborate costumes. Evan Allen (12, MST), donned both a pink shirt and pink pants, as well as a bright pink wig. “I loved this addition to Red/White Week,” he said. “It was a great way to raise awareness for breast cancer in our school. Also it was fun to wear a neon pink wig all day.”

While many appreciated the ability to calibrate their participation, some students did not think that the theme fit well alongside the unbridled spirit of the other festivities. “I had a performance in chamber ensemble, and I had to wear a dress, so I couldn’t participate,” said Alice Judy (10, YPAS). “I think that this was a cool theme, but it should have been used for one of the pep rallies instead of Red/White week. This week is supposed to be a lot more extravagant.”

Additionally, freshmen took the opportunity to learn more about Red/White week traditions after yesterday’s introduction. “So far, I enjoyed Disney Day more because so many people had really unique costumes, although today was pretty funny too,” said Diya Mathur (9, MST). “Today was nice because everyone who wore pink knew that they were doing it to support breast cancer awareness.”

Though the pink-out was intended to support breast cancer awareness, no donations were made to fund further research. “It was originally our plan to organize a penny war between classes and donate all of the proceeds to Susan G. Komen,” said Shelby Johnson (12, HSU), Executive Council President. “We got word of two or three other clubs doing drives this week, so we canceled it. I’m not sure if those other clubs actually carried out their drives.”