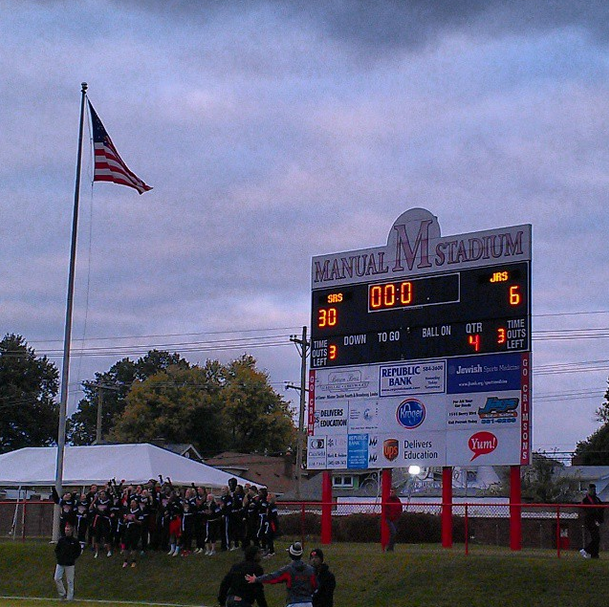 The Manual Seniors celebrate their victory beside the scoreboard, where they sang "Stand up and Cheer" for everyone to hear. Photo taken by Marissa Mitchell.

In the first half, Erica Hawkins (12) aka “OOO KILLEM’,” scored a touchdown with 24:50 left to go, and only five minutes later, Hawkins scored a second touchdown, making the score 12-0. By the end of the half, Seniors were in the lead 16-0.

“It felt really great to make that touchdown. It was so much fun!” Kubala said. “Even though we lost, we had fun in the process. I can’t wait until next year.”

With 10 minutes left in the game, the Seniors scored their final touchdown and won the game.

Issac Domenech (11) was a coach for the Juniors this year.

“Coaching the game was a great experience. It’s easily one of the most entertaining jobs to have,” Domenech said.

Adrianne Cameron (11) was the cheer teacher this year.

“They were really good this year, and they worked really hard,” Cameron said.

John Ross Gribbins (11) was one of the many cheerleaders for the Juniors. (The Seniors didn’t have cheerleaders this year, for unknown reasons.)

“It was pretty cold, but I still gave it everything I had.” Gribbins said.