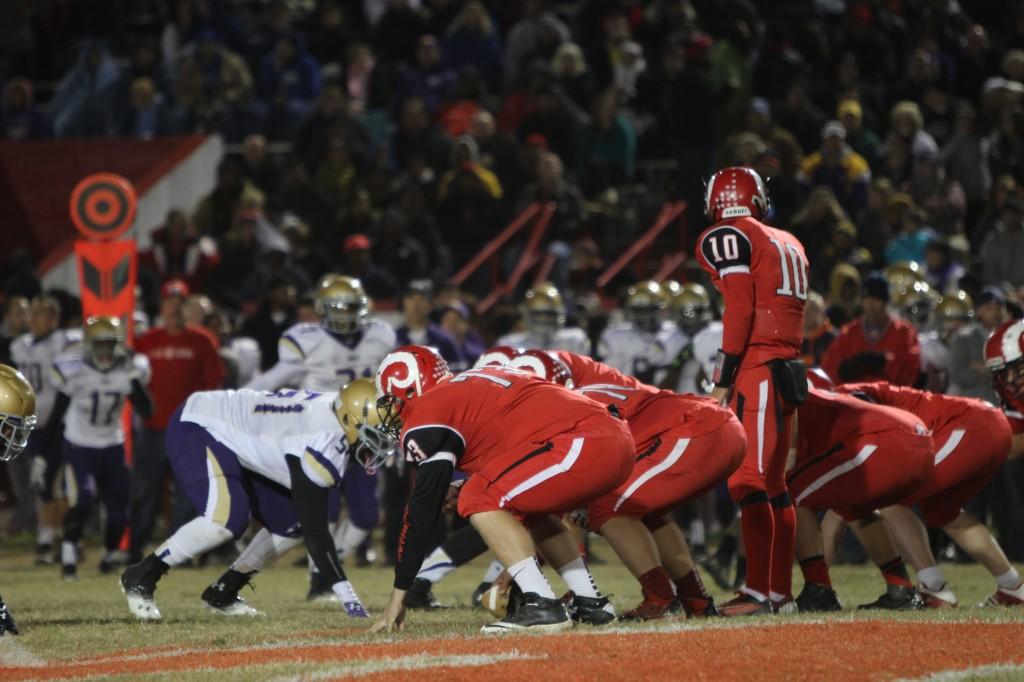 The football players waits the clock to start again.

The duPont Manual football team defeated archrival  Male on Friday night 32-29 in front of an estimated crowd of 13,000 at Manual Stadium in the 121st Annual Old Rivalry Game.

The win was the Crimsons’ fourth straight, completing a sweep of the Bulldogs for this year’s graduating class of 2014.

Male started the action early in the first quarter, with two passing touchdowns from quarterback Davis Mattingly to make the score 14-0.

But the Crimsons were able to find the endzone on their third drive, when running back Michael Nero (#27, 11) broke free from the Male defense and ran 54 yards to make the score 14-6, after a missed PAT. Nero finished the game with 233 yards and 3 touchdowns. It was Nero’s third 200-plus yard game of the season.

On the first play of the second quarter, Manual quarterback Mason Motley (#10, 12) connected with wide receiver Matthew Cissel (#89, 12) for a quick touchdown that brought the score to 14-13, Male.

The Bulldogs scored again following an interception, but Nero broke free once again to score another huge touchdown with under 18 seconds left in the half to bring the halftime score to 21-19 after a missed Manual 2-point conversion.’

The Crimsons were the first to add to the scoreboard in the third quarter  to make the score 32-21.

Male fought back to knock the Crimson lead down to 3 after Mattingly threw a screen pass to running back Ellis Cain for a touchdown. The Bulldogs completed a 2-point conversion, making the score 32-29.

With 1:18 remaining in the game, Male head coach Chris Wolfe forewent the opportunity to take a short field goal after the Bulldogs missed one early in the third quarter. The Crimsons’ defense was able to stop Male on 4th down to regain possession, and ran the clock out from there.

The Crimsons advance to 7-2 on the season and will play at Eastern next week in the final regular season game of the season.

Male is handed their first loss of the season and will go into next week’s game against CAL with a 8-1 record.

Both teams are guaranteed spots in the KHSAA State Championship Playoffs.