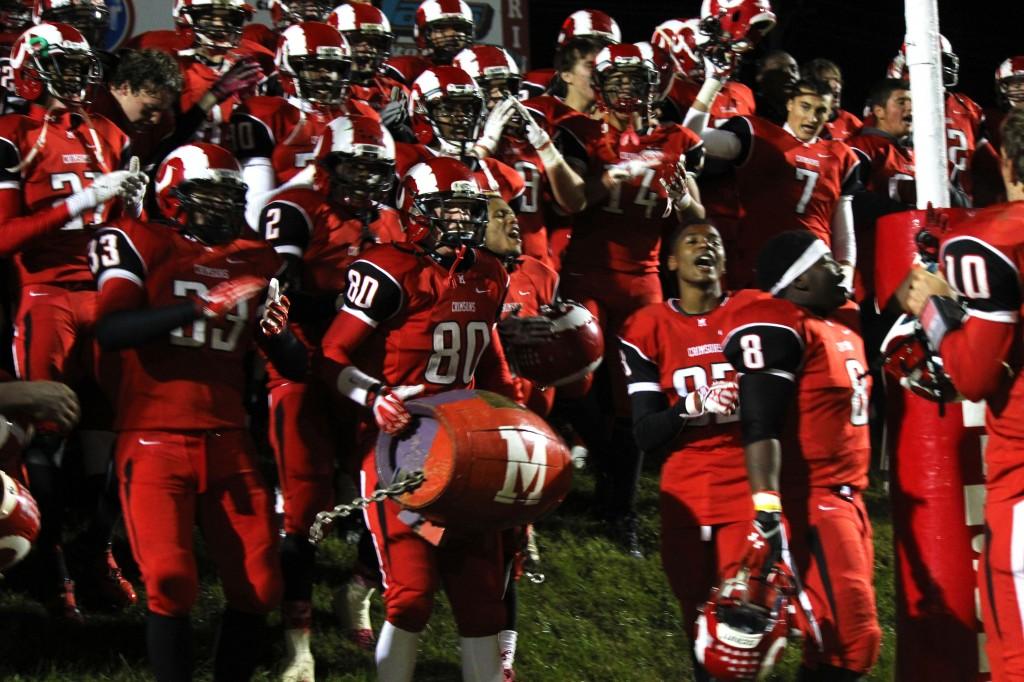 At the end of the game, the football team lines up to take a picture with the barrel right after their win.

As the state football playoffs wind up, it is time to take a look back at the season that the Crimsons had this year. After a disappointing 4-6 finish last year, the Crimsons fought back and finished with a 9-3 record, losing only to Catholic powerhouses Trinity and St. Xavier.

Over the past several football seasons, Manual’s team has been fortunate enough to be blessed with a plethora of talented running backs. A Manual running back has had a 1,500+ yards rushing in 3 of the last four seasons. Following in the footsteps of Manual alumni Darmontre Warr (Class of 2012) and Dishan Romine (Class of 2013), this season Michael Nero (11) carried the torch and carried the team on his back to a successful 9-3 record. On the season, Nero average over 7 yards per carry, 150 yards per game, and finished the season with a dazzling 23 total touchdowns. But it wasn’t just the sheer volume of production that made Nero stand out as a man amongst boys on the gridiron. Whenever Manual needed him, Nero seemed to always answer with a monster play. Tied 7-7 against Ballard late in the fourth quarter, Nero ran up the middle and burst through the pile, taking off for a 60 yard touchdown run with less than a minute left to play. The run solidified the victory and Nero’s place in the hearts of Manual fans. The Crimson Crazies will be sure to continue their chants of “Nero Hero” onward into next season.

Motley to the Rescue

But being one dimensional has never been the recipe to success for any football team. There were times during the season when opponents packed the box with eight defenders, making it nearly impossible for Nero to have any running room. The Crimsons turned to veteran quarterback Mason Motley (12) to lead the team. A three year starter, Motley is the only quarterback in Manual history to defeat the Male Bulldogs three consecutive times. But Motley shined his brightest in the 38-30 loss to the Trinity Shamrocks. He set the school record for passing yards in a game with 417, and added two touchdown passes in order to give Manual a fighting chance against a team that has historically taken Manual to the woodshed. “It really helped having Mason back as our quarterback this year. His leadership helped us out when we were in some tight spots,” said wide receiver Isaac Draper (12).

The Old Rivalry. The annual football game versus the Bulldogs of Male High School has been a staple of life at Manual since 1892. This year’s seniors had the opportunity to capture the elusive 4-peat–a clean sweep against Male and bring the Barrel back to the halls of Manual every year that they attended Manual. Going into the game, Male was ranked #3 in the state according to the Courier-Journal’s Litkenhous rankings, while Manual was barely in the top ten. October 25th came and it was bitterly cold, with the wind chill dipping into the low 20’s. Yet that didn’t stop fans from Male and Manual coming out in droves to Manual stadium to support their teams–some spirited students even braved the elements and painted up despite the freezing temperatures. Michael Nero rushed for 233 yards and 3 touchdowns, carrying the team on his shoulders to a narrow 32-29 victory. “The best feeling in the world is knowing that you have bragging rights over Male for the rest of your life,” student-section leader Sam Coryell (12,) said.

Even after a successful season, Coach Oliver Lucas and the Crimsons are not satisfied. They hope to return and push forward towards their ultimate goal: a state championship.