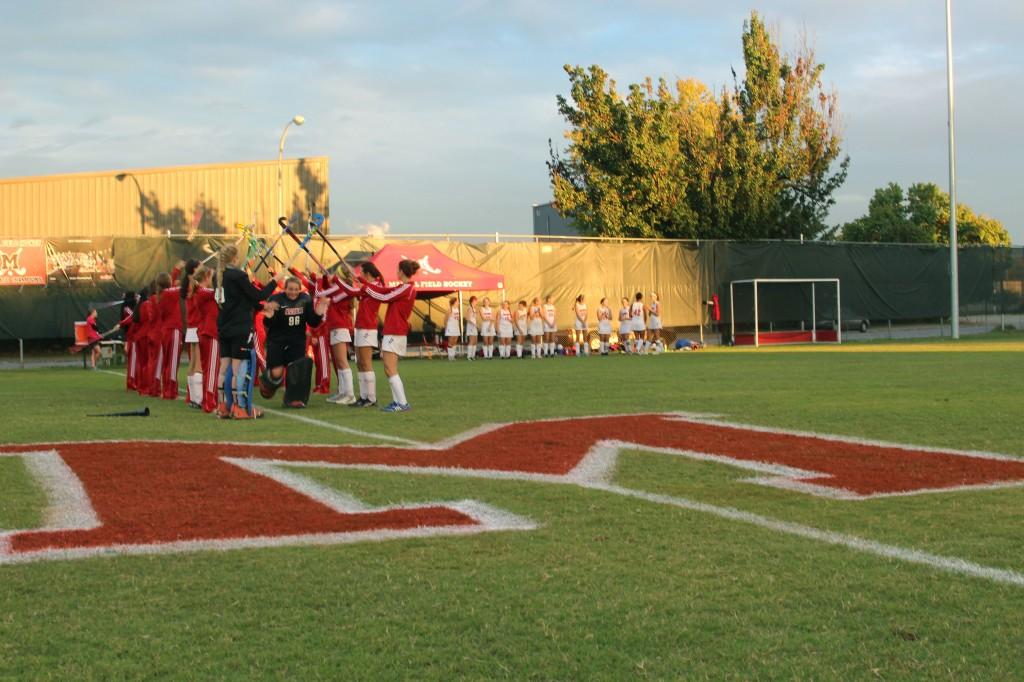 Earlier in the year, Carly Rodman (11,J&C) and a few other juniors had the idea to have a boys field hockey game, similar to the powder puff football game for girls. They believed that the game would attract a large amount of spectators since it would be humorous to see high school boys play a sport predominantly played by women.

The idea surfaced in January, so Rodman first went to Mr. Kuhn to promote the idea. Kuhn was in support of the idea and then directed Rodman to Mr. Mayes so she could potentially finalize the plan. Mr. Mayes was also in support of the idea; however, Athletic Director David Zuberer wouldn’t allow the game to be held on Manual’s field hockey field. Rodman considered her options and decided that the field at Noe Middle School would be the next best thing. She then got the approval from John Gribbins (athletic director at Noe) for the junior senior game to be held on their field. So, after a couple months of talking to administrators and athletic directors, the planning of the event is finally nearing completion.

What sets the junior senior field hockey game apart from the powder puff football game is the fact that Rodman has taken it upon herself to set up a donation system with an organization for the game. There is a $5 minimum donation upon entry to the game. All the money will be donated to OXFAM, a charity organization that aims to end world hunger and feed the less fortunate. Rodman also set up a website where people can make online donations prior to the game.

“Our goal is to raise $500 through the online donations. As a way to motivate people to meet the goal, I went to Mr. Mayes to see if he would let a student throw a pie at his face if the $500 goal is met,” said Rodman, “he has yet to give a final answer.”

The game is now scheduled for Wednesday, May 28, and is to be played on the Noe Field Hockey field. Rodman has compiled full teams for both the junior and senior class. The coaches for the senior team will be Emma Harris (12,J&C) and Renee DuFour (12,HSU), both varsity starters for Manual’s field hockey team. The junior team coaches are Emma Baird (11,J&C) and Katherine Stodghill (11,J&C), also varsity players for Manual. Mrs. Cooper is the sponsor of the event and will be overseeing all planning that’s going in to it.

All equipment for the game will be provided by the Manual field hockey team. This includes sticks, balls, protective eye wear, shin guards, and goalie pads. Players will be required to provide jerseys, cleats, and mouthguards.

“Everybody seems to love going to the powder puff game every year, so the goal is to have a similar response from the student body for the junior senior field hockey game,” said Rodman.

Rodman talked to the Dazzlers dance team in hopes that they would perform at halftime of the game. They agreed to perform, which should attract even more spectators, given the fact that they are considered one of the best dance teams in the state.

Rodman’s ambitions to make this game happen and gather donations has made its way to Stuart Ungar, journalist for the Courier Journal.  Ungar wrote a piece, “Manual junior takes field hockey stick to hunger”, which can be read here,

Stay tuned to www.manualredeye.com for more updates about the junior senior field hockey game. Below are the rosters for the junior and senior team: