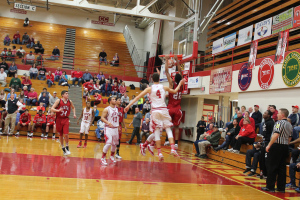 Boys’ basketball downed the Jeffersonville Red Devils 79-61 on Jan. 3, bringing the Crimsons to 12-1 on the season, while dropping the Red Devils to 2-7.

Despite the win, head coach Jimmy Just (Math) was not satisfied with the lack of assists and the team’s overall chemistry during the game.

“We had some good moments, but then we had some moments when we didn’t play our game,” he said. “I think we got out of our system, both defensively and offensively… I don’t think it’s a long term concern, but it’s always a problem when we’re not sharing the ball.”

With the team nearly halfway through the regular season, forward Dwayne Sutton (12, #22) is happy with the direction the team is going.

Sutton has been the leading scorer for the Crimsons this season, and he electrified the crowd with two dunks, one midway through the first quarter and another to start the second half.

Manual’s next opponent is the Central Yellowjackets, whom they face off against on Jan. 6.

“We’ve gotta prepare for the pressure because they bring a lot of it,” said Ty’Ron Horton (12, #24). “They have small guards, they get on the sides and they go quick.”