Ami Ballard fills in to help Manual slide by CAL 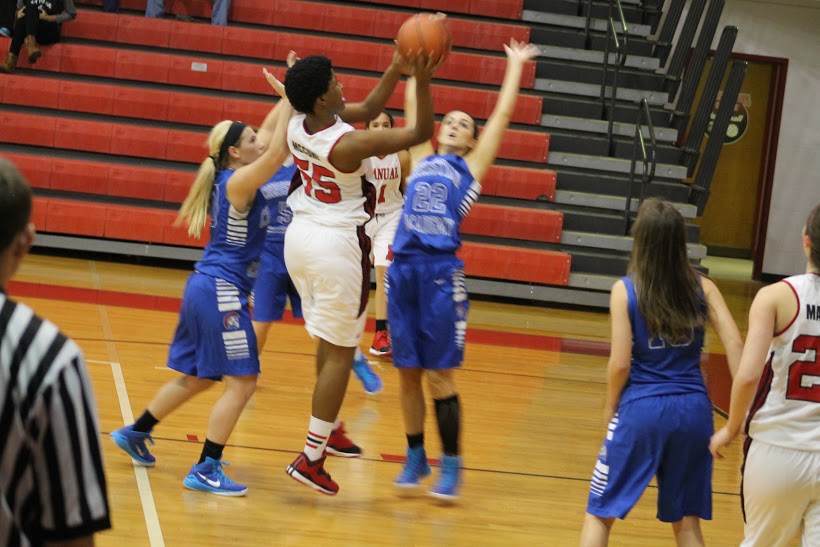 Manual defeated Christian Academy of Louisville (CAL) 57-46, in a very low scoring game. It seemed as if Manual was going to shut-out CAL as they lead 20-7 at the end of the first quarter. CAL responded with an 11-3 run in the second quarter to give the game a more competitive edge.

“We relaxed a little bit, and one thing we work on is not relaxing when we get a lead,” head coach Jeffrey Sparks said. “I try to tell them that because of the way they shot they’ll never be out of it. We had players tonight who tried to do a little too much. In tonight’s game we needed to work as a team more than we did.”

Starter Arika Prentice (12, #25) was not able to attend the game, and Ami Ballard (11, #11) had to start in her position.  Ballard played very well in Prentice’s absence.

“Ami did great tonight,” Sparks said. “She’s usually one of our first guards off of the bench but she filled the starting role great. It’s good to know that a team can be presented with a problem and have the players to fix it.”

Ballard was an essential part of the offense, forcing several turnovers and scoring from the three-point line.

“I was definitely nervous but I started getting into the flow,” Ballard said. “I felt more confident and like I was an important aspect. As a team we are becoming much closer and we are getting a feel for each other. We’re ready for (Louisville Invitational Tournament) and plan to do well.”

Manual’s next game will be at George Rogers Clark High School in Winchester, Kentucky. Tipoff is at 3:00 p.m.