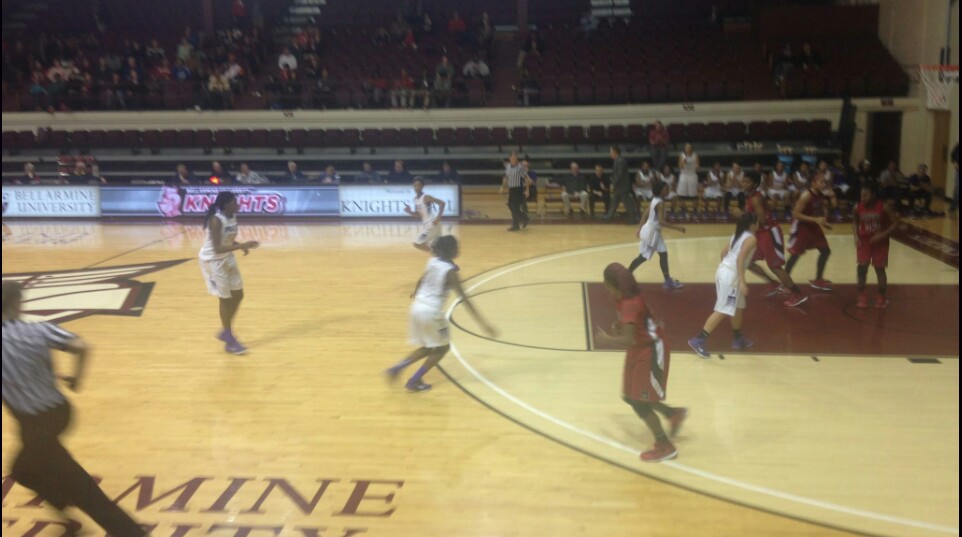 Rival Male Bulldogs defeated the Lady Crimsons 62-52 in the second round of the Louisville Invitational tournament. Manual played great defense throughout the first half and they went on several runs where Male would not score at all. Male went on a 17-point run to tie the game with 4.8 seconds left in regulation in the middle of the fourth quarter. Male won in overtime 62-52 and has defeated Manual two times in a row now.

“We have to play four quarters,” head coach Jeffrey Sparks said. “Two quarters doesn’t mean anything as you saw. A basketball game is four quarters, not two, and we didn’t play the full game.”

Manual played lock-down defense throughout the first half. They held Male to 17 points while scoring 31.

“We played great throughout the first and second quarter,” Sparks said. “We got off to some good runs and played great basketball but we couldn’t hold out.”

Manual missed several free throws throughout the entire game. Manual eventually missed enough free throw to allow Male to claw their way back into the game and to win in overtime.

“It never feels good to lose to Male, and it feels even worse to blow a 17-point lead and be knocked out of the LIT tournament,”  Angelica McBride (11, #24) said. “We’ll be ready for next time we play them and we know what to fix.”

The Male Manual rivalry is one of the largest high school rivalries in America, dating back to the 1892. The outcome is unknown each time the two schools meet.

“We thought we had this game, but we just couldn’t hang on,” Sparks said. “Male just played with more heart than we did tonight.”

Manual will look to their next game against Waggener on Feb. 6.  Tipoff is at 6 p.m. at home.

“Male played harder, they wanted it more, and we couldn’t hold on.” Sparks said.