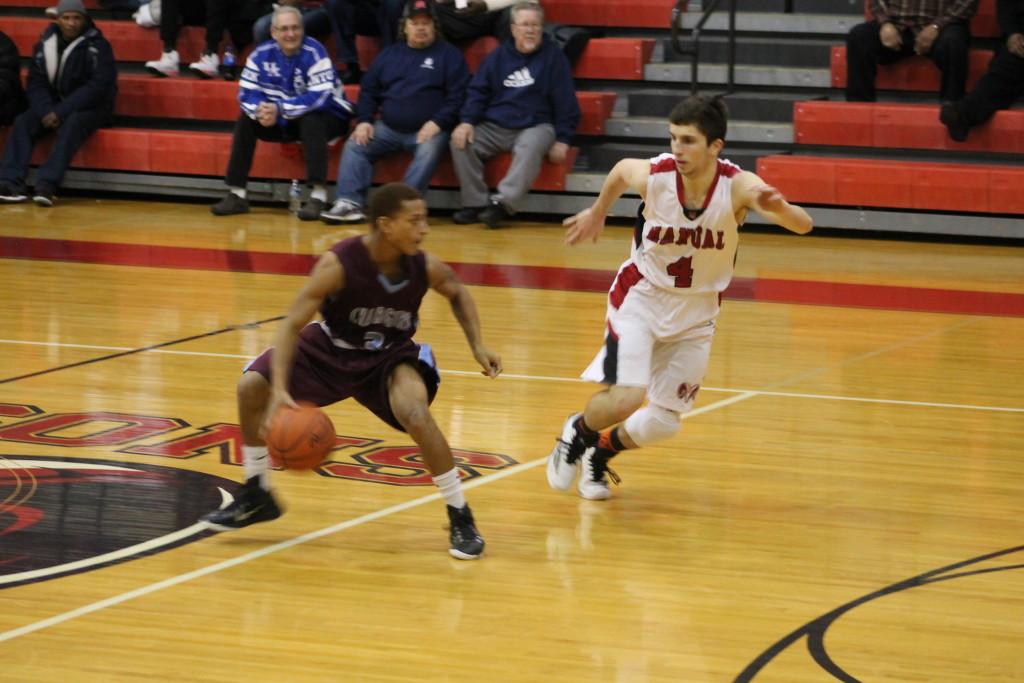 Manual came out firing on all cylinders against Jeffersontown on Friday night. The Crimsons started the game with a 10-0 run and a 14-4 run to open the second quarter, and they gained control throughout the game. Manual outscored the Chargers 27-16 in the second quarter alone before coasting to a 76-58 win. The Crimsons used a combination of pressure defense and hot shooting to get out to the early lead.

“Our defensive pressure was high at the start of the game, and we shot it well early, so it kind of put them out fast,” Jarrett Harness (12, #4) said. “We shot open shots. We usually hit them when we’re open; when we shoot contested shots our percentage is a lot lower.”

Manual was able to capitalize on good ball movement throughout the game to hit open shots.

The Crimsons also effectively slowed down the Charger shooters, and they were able to keep Jeffersontown from getting anything going on the offensive end.

Manual rotated well defensively to keep Jeffersontown from being able to get to the basket.

“We helped a lot against the dribble drive and we just kept rotating,” Harness said. “Our rotations were a lot better tonight than in previous games so that was big for us.”

Manual also fought hard on the offensive glass and owned the boards for the majority of the game. The Crimsons used this advantage to spark their 14-4 run in the second quarter when Eric Niemann (11, #33) got an offensive rebound and then found Ja’Kory Freeman (12, #10) for a three, and Ty’Ron Horton had a put back for an old-fashioned three point play on the next possession.

Dwayne Sutton (12, #22) led all scorers in the game with 24 points, to push his average to 24.2 points per game, which leads all players in the Metro Louisville Area. Chris West (12, #3) was the only other double figure scorer for Manual, as he added 14 points for the Crimsons. Noah Hawkins (9, #42) did not play until the last three minutes; however, Hawkins added six points, four rebounds and a block in the rout. Even though Hawkins showed flashes of potential late in the game, Just said that he still has to improve before he will see consistent playing time.

“He just has to keep working hard and a lot of it just depends on what our situation is,” Just said. “He’s out there and in that situation I think he played well, but there is a lot that he still has to learn and that’s the big thing; he’s just got a lot of growing up to do.”

The win extends Manual’s win streak to four, as the Crimsons have not lost since the Bullitt East upset in the LIT quarterfinals. Manual (18-3) will put its win streak on the line against Paul Laurence Dunbar in the King of the Bluegrass Showcase at Fairdale tomorrow at 4:30 p.m.