Manual’s Guide to the 2015 Academy Awards 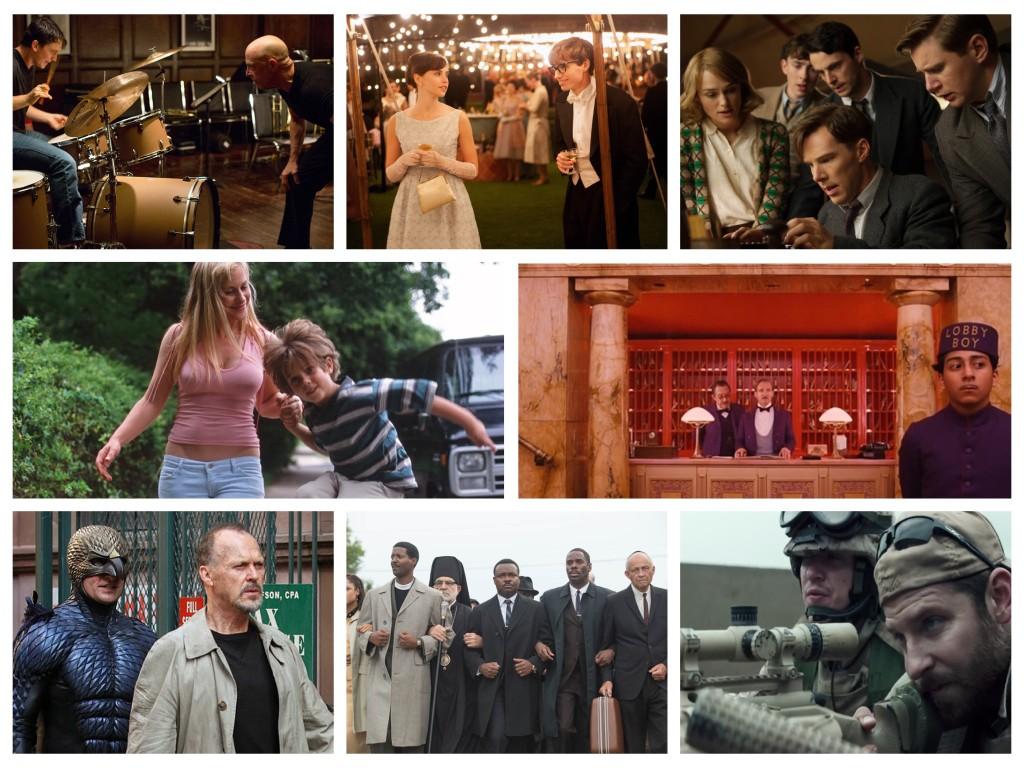 With the Oscar ceremony coming up this Sunday, Feb. 22, people are scrambling to see the Best Picture nominees beforehand. Even though most of the eight nominees have been out of theatres for a while, Tinseltown is the only theater in Louisville that will be doing an Oscar marathon this week before the ceremony. If you missed any of the movies the first time it came to theatres, you can purchases tickets to see an individual nominee or passes to see all eight of them on Cinemark Tinseltown’s website. To help you decide which ones you should see, here’s a guide to the 2015 Oscar nominees for Best Picture. 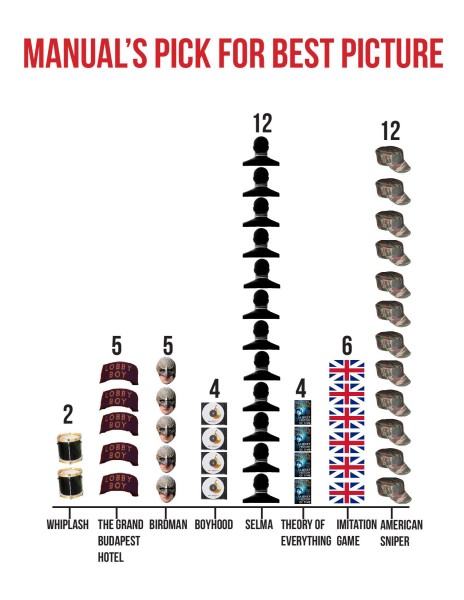 Should you see it? Boyhood is a wonderful exploration of what it is like to grow up, mostly because you actually watch the characters grow up onscreen. Linklater filmed this movie over the course of 12 years, so you actually see all of the actors grow up in front of your eyes. Not only is this a huge technical undertaking, but also creates a wonderful sense of realism as you watch main character Mason Evans (played by Ellar Coltrane) go through the adolescent struggles in the movie that he is probably going through in real life.

Student Opinion? “I enjoyed the way the film displayed this journey that this boy takes through his life and also how the characters developed throughout the piece,” Zoe Greenwald (11, YPAS) said.

Movie: The Theory of Everything

Should you see it? The Theory of Everything tells the story of Stephen and Jane Hawking (played by Eddie Redmayne and Felicity Jones, respectively), focusing not only on scientific discoveries but also their relationship. Jones gave an extremely strong performance, and I wish her struggles would have been focused on more. Redmayne gave a convincing performance, but occasionally fell back on acting gimmicks.

Chances of winning? Although The Theory of Everything doesn’t have a good chance at Best Picture, Eddie Redmayne will most likely win Best Actor, which does boost its chances slightly.

Student Opinion? “I felt like the film showed that there is more to Stephen Hawking personality-wise than his physical limitations,” William Black (10, MST) said. “He had a wife. He was normal. Eddie Redmayne highlighted the best in Stephen.”

Should you see it? Selma is an extremely well-written and well-constructed film about the struggles of African Americans in the South who were trying to gain unimpeded voting rights in the 1960s. It mainly focuses on Martin Luther King Jr. (David Oyelowo) of course, and the marches he organized, including one in Selma, Alabama. Not only is this movie extremely cinematically sound, as it is one of the more entertaining historical films I’ve seen, but it is also especially pertinent because of what is happening today with police brutality.

Chances of winning? Selma was nominated for only one award outside of Best Picture, which is Original Song. Although it has a good chance of winning in that category, Best Picture seems to be unfortunately out of reach. It is not surprising to learn that the Academy that decides the nominees is basically comprised of old white guys.

Student Opinion? “It was a story that I’d never heard told that way before, which is really unfortunate because you hear the same stories over and over again when it comes to black history,” Breya Jones (11, J&C) said. “You hear about the March on Washington and the Montgomery Bus Boycott, and I had never heard of what happened in Selma. It was an interesting way to tell a story I had never heard. It kept me engaged the whole time.”

Should you see it? I went into The Imitation Game expecting not to be a fan because it was marketed as an extremely British period piece that focused primarily on advances in math and science. I was extremely surprised, however, that it soon became one of my favorites of the year. Benedict Cumberbatch plays Alan Turing, a gay British mathematician who broke the Enigma Code, which was used by Germans to send messages during World War II. Keira Knightley plays Turing’s female colleague Joan Clarke, and was extremely deserving of the Best Actress nomination.

Chances of winning? Imitation Game probably has the fourth highest chance of winning. Although it doesn’t have much buzz, it was nominated in seven categories outside of Best Picture, including Actor in a Leading Role, Actress in a Supporting Role, Directing, and Writing (Adapted Screenplay).

Student Opinion? “The story is heart wrenching and powerful and left thinking about it long after the credits rolled, and it deserves the praise Alan Turing never got,” Sara Cox (11, VA) said.

Should you see it? Aside from the fact that Anderson is my absolute favorite director, The Grand Budapest Hotel is a nearly perfect film. It’s easy to tell that Anderson tried to make it as close to his vision as possible. While the quintessential Anderson aesthetic proves as visually stunning as always, the story and script are also incredibly clever. It’s an extremely fun movie to watch, but is also extremely moving. Out of all of Anderson’s films, it is probably the most well-constructed. It’s as if he found a way to perfectly combine his signature aesthetic and his distinctive writing style.

Chances of winning? The Grand Budapest Hotel is tied for the most nominations alongside Birdman, and both of those films probably have the second-highest chance of winning. Anderson was nominated for Directing and Screenplay (Original), which boosts his chances of winning Best Picture.

Student Opinion? “It is a multi-layered story, told within different frame sizes and styles,” Evan Sennett (12, YPAS) said. “The aspect ratios hold no boundaries for the zany wittiness, inspired by the likes of Max Ophuls and the Marx Brothers.”

Should you see it? Birdman is probably set to be one of the most important and enduring films of the 21st century. It’s an especially important film for future filmmakers, as it makes a lot of important points about the entertainment industry. Another cool thing about Birdman is that the entire movie is filmed to look like a single camera movement; there are no jump cuts or cuts at all, which makes it not only insightful but also innovative. Michael Keaton fits the part of aging actor Riggan Thomson perfectly; it is obvious that Birdman was inspired by Keaton’s portrayal of Batman.

Chances of winning? Birdman is tied with The Grand Budapest Hotel for the second-highest chance of winning. Inarritu was nominated for both Directing and Screenplay, and Michael Keaton, Emma Stone, and Edward Norton got nominations in three of the acting categories as well.

Student Opinion? “Birdman (or the Unexpected Virtue of Ignorance) is an outstanding juggernaut of a film,” Alex Minton (11, YPAS) said. “The film features stunning cinematography, stupendous dialogue, and a stellar ensemble cast. Alejandro Gonzalez Inarritu has given to us one of the best directed films of the past decade. This film also has the honor of being thought of as an ‘experience’ more so than any film I’ve seen in the past decade. Michael Keaton is the heart of the film and without him this film would not work. It would be like making Being John Malkovich without John Malkovich. Michael Keaton gives the best performance of his career and Edward Norton almost steals the show from him. Both are able to make fun of themselves and the industry without being cynical about the art community today. The film does a marvelous job of being a satire of the film industry and an analysis of the film industry without being pessimistic. It simply presents things as they are. Birdman is a powerful and important film that I believe will define a generation of filmmaking. So see it immediately. It’s great.”

Should you see it? American Sniper is an extremely average film in terms of quality. While the combat scenes do an adequate job of depicting the horrors of war, it tends to be a bit one-sided, and by the last few scenes it definitely seems like a white savior film. Except in this white savior film, rather than “saving” every non-white character, the soldiers kill them. It’s not that all war movies are white savior movies. More objective war movies have been made, like Full Metal Jacket and Paths of Glory, and they’re great. However, American Sniper isn’t nearly as effective simply because it is so biased.

Student Opinion? “This movie was really inspiring and portrayed a realistic view of what soldiers go through and how it effects their every day life,” Jenna French (11, YPAS) said. “At the end of the movie everybody exited the theater in silence and an appreciation for our soldiers’ sacrifice was left with everyone who was fortunate enough to experience the film.”

Should you see it? Whiplash is an amazing movie, and anyone that wants to pursue a career in the arts should watch it. Chazelle does a fantastic job of capturing the passion of Andrew (Miles Teller), a college student who desperately wants to play in his teacher’s (J.K. Simmons) jazz ensemble. Andrew’s story is especially relatable to high school students, as all of us are probably thinking about how we can achieve our career goals.

Chances of winning? Whiplash most likely will not win, although J.K. Simmons was nominated for Best Actor in a Supporting Role and will almost definitely win.

Student Opinion? “Whiplash is exilerating,” Erik Moth (11, YPAS) said. “It has fantastic music and brings across a story that keeps you on the edge of your seat. J.K. Simmons gives the performance of the year and will leave you shaking when you exit the theater.”