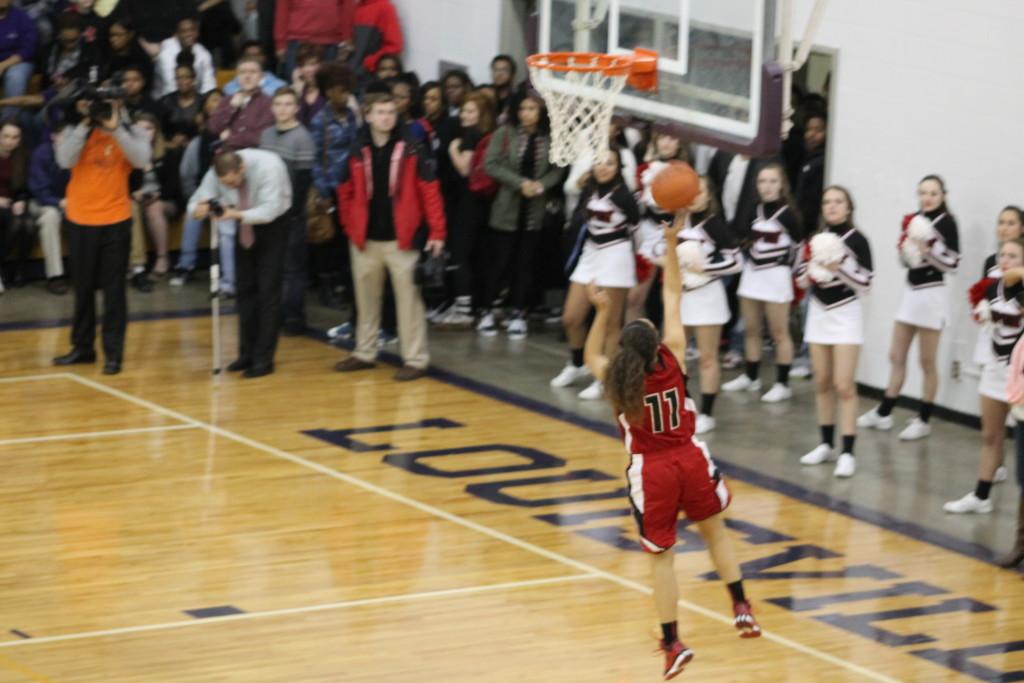 Ami Ballard hits a layup after stealing the ball and running down the floor. Although it was Ballard's only shot of the game, it came at a crucial point in the fourth quarter and shifted the momentum in Manual's favor.

Manual defeated Male 56-50 on Feb. 13 in one of the closest matches of the season.

At several points during the game, either team could have pulled ahead, but the Lady Crimsons prevailed thanks to their strong defense led by Krys Mccune (#55, 11) and Amara Ballard (#11, 11). Manual was able to block shots and force turnovers, leading to easy baskets.

“Our new defensive sets worked well, but they also allowed some easy points too,” Head Coach Jeffrey Sparks said. “We need to get better at executing these plays, but one thing is for sure: these plays helped us keep Male contained tonight.”

Sydney MacBlane (#25, 11) performed especially well this evening. MacBlane effectively maintained control of the ball and led the offense to several necessary baskets. She also played well in the 2-1-2 zone defense that Sparks had drawn up for this game and the post-season.

“It felt very good to win and get a little revenge for the LIT loss,” MacBlane said. “We held onto the ball when we were up on the scoreboards which helped us a lot on tonight’s win.”

Tonight’s game marks the third time that Manual has met Male and Manual’s first win against the Bulldogs under the leadership of Head Coach Sparks.

The victory is especially meaningful considering the upcoming post-season.

“This win means a lot for the postseason,” Sparks said. “It gives some confidence and shows what we are really capable of. [Male has] got a great team, and I told the girls before we came out here tonight that it was going to be a heavyweight battle. We expected this, we knew we were going to have to play our best, and we did.”

The Lady Crimson’s final regular season game is next Friday, Feb. 20 at 6:00 p.m. They will host Ballard.