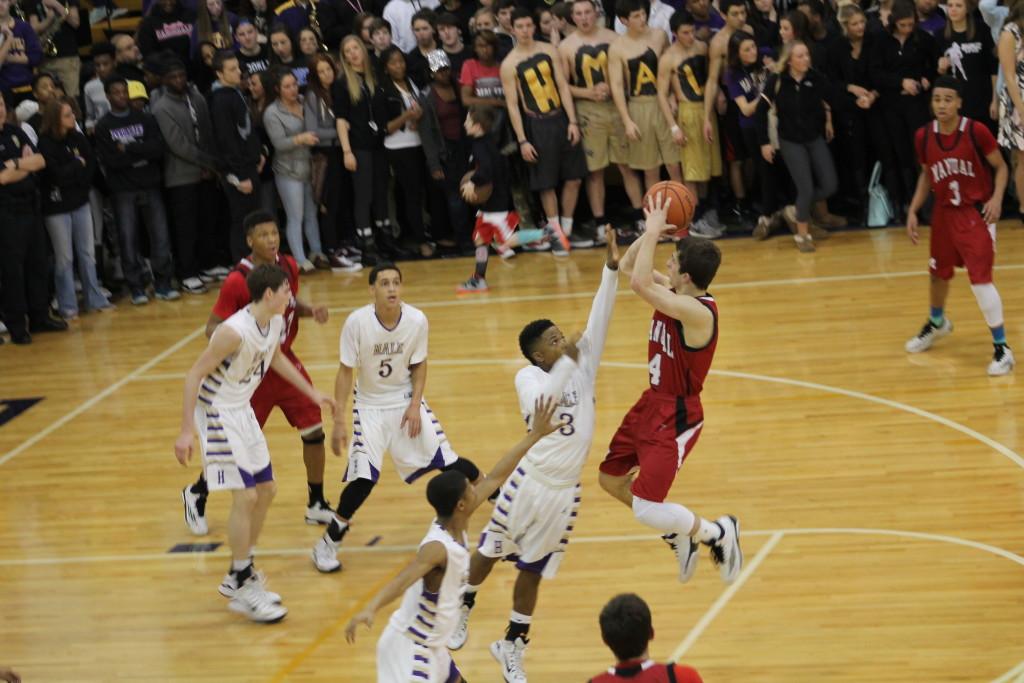 Jarrett Harness (12, #4) goes up for a shot. Harness is one of the team's leading scorers, but had a fairly quiet game.

Male upset the boys basketball team Friday night after the Crimsons managed to score only 18 points in the second half. Manual did not make a field goal in the second half until Dwayne Sutton (12, #22) hit a layup and got fouled with 7:01 left in the fourth quarter. The Crimsons only scored five points in the third quarter, and only had eight second half points at the 3:05 mark in the fourth quarter: the Sutton layup and six made free throws.

After falling behind by eleven points at 55-44 with 3:05 left, the Crimsons went on a quick 8-0 to cut the Bulldog lead to three at 55-52 with 2:03 left. Manual could not get any closer as Sutton missed an open three and a layup on Manual’s next two possessions and Male’s Brandon Horne (12, #5) and Jordan Johnson (11, #25)  converted enough free throws to ice the game in its final minutes, giving the Bulldogs a 65-54 win.

“We were just stagnant; we weren’t really moving a lot, just dribbling around the perimeter,” Jarrett Harness (12, #4) said.

Manual only hit four field goals in the second half, and also only hit six of 15 second half free throw attempts.

Manual’s lack of player and ball movement killed the Crimsons in the second half.

“I don’t think that it was very much of what Male did, it was more of what we were doing,” Freeman said. “We stopped playing, we kind of stood around and watched each other play on offense.”

After a while, the long nine minute scoring drought got to the Crimsons’ heads, as Manual was not able to knock down the few open shots that they were getting.

“We need to get our minds right,” Just said. “We can do it when we want to, so it’s just a matter of whether our minds are right or not.”

Manual did play much better in the first half. The Crimsons used a 13-2 run to outscore Male 27-13 in the last ten minutes of the first half, thus taking a 36-29 lead into halftime.

However, in the second half, Male started to double team Sutton, who scored 16 points in the first half, in the post, which took the Crimsons out of their offensive rhythm.

“When [Sutton] is being doubled and he’s trying to do too much like tonight, then yes, it has a very negative impact on our offense,” Just said. “When he just lets things come to him a little bit more, then it wouldn’t of bothered us at all. We have a lot of guys around that can help the team and score; we just have to make sure we use it, and we didn’t do that very well tonight.”

After Male started to double Sutton, the Crimson offense became stagnant, and the scoring drought began.

The Crimsons also struggled to rebound the ball early and late in the game. Male’s Will Parker (12, #22) scored 18 points, ten of which were second chance points, as well as eight offensive rebounds in the ballgame.

Manual had a lot of trouble boxing out, as the Crimsons gave up 13 offensive rebounds.

“We just need to box out and get a body on them,” Harness said. “They were taller than us but if we box them out they still can’t get rebounds.”

Sutton led all scorers with 27 points. Horne led Male with 19 followed by Parker’s 18. Freeman added ten points for the Crimsons.

After the loss, the Crimsons will try to regroup going into next week, where Manual has Saint Xavier and the number one ranked Ballard Bruins waiting for them on Tuesday and Friday, respectively. The Crimsons will hold a players-only meeting tomorrow.

The team hopes to make the necessary improvements before the postseason starts on Feb. 24.

Manual will host the Saint Xavier Tigers on Tuesday night at 7:30 pm.

Dwayne Sutton declined to interview for this article.