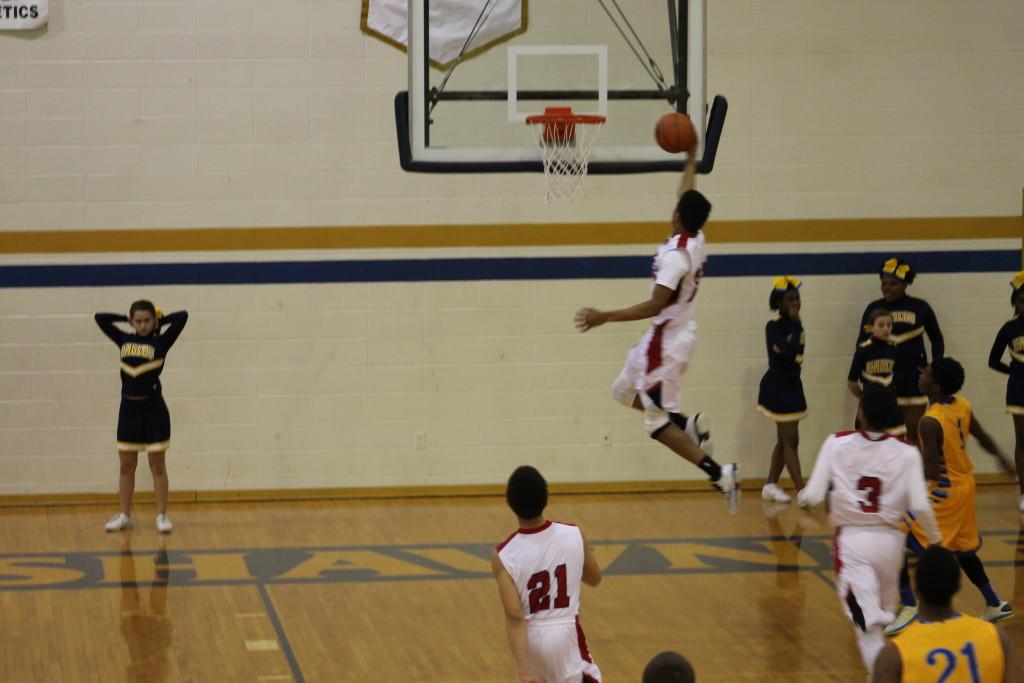 Dwayne Sutton (12, #22) goes up for a layup in the first half. Sutton was responsible for 9 of Manual's 11 points in the second quarter.

Though the boys basketball team received a surprising gut-check from Shawnee, Manual walked away with a 65-47 victory thanks to a huge second half comeback featuring a strong performance by Eric Niemann (11, #33) and strong full-court defense by the whole team.

The win advanced Manual to the district final on Thursday.

More than two-thirds of the team’s total points came in the second half. The comeback victory sprung from a big momentum swing in the third quarter, with Niemann leading the charge.

“My teammates picked me up at the end of the first half, [and] told me to keep playing hard,” Niemann said. “I just wanted to do what the coaches told me to do all season.”

The game started rough for Manual, as Shawnee’s consistent jump shots were difficult for the Crimsons to guard. Manual struggled with fouls–seven in the first quarter–and had difficulty taking care of the ball early on. At the end of the quarter, the Golden Eagles led Manual 20-10.

After Dwayne Sutton (12, #22) stole the ball and drove in for a layup to start the second quarter, Manual went into a scoring drought that lasted until 4:02 mark, when Noah Hawkins (9, #42) had a putback layup. This sparked a 7-3 spurt with 1:41 left in the half, cutting Shawnee’s lead to eight. The rest of the half consisted of several turnovers and missed opportunities for both teams. At halftime, Manual trailed 29-21. Sutton scored nine of Manual’s eleven total second quarter points.

After Shawnee scored first in the second half, Ja’Kory Freeman (12, #10) answered with a three pointer. From there, Manual came out stronger than in the first half, passing the ball around and avoiding foul trouble. Niemann hit the shot to tie the game with 3:43 left in the quarter. Steven Gordon (11, #21) stole the ball from a Shawnee player and laid it up with 3:31 left, giving Manual its first lead since the first quarter, and Niemann continued hitting shots, bringing the lead to six points. The Crimsons scored more points in the third quarter than in the entire first half, leaving the score at 45-39 at the end of the third quarter.

Jarrett Harness (12, #4) hit a three pointer to start the fourth quarter, followed closely by Sutton’s layup that brought the score 50-43 with 6:36 to play. Freeman and Sutton then scored baskets to lift Manual’s lead to double digits with 5:02 to play. Manual went scoreless for the next couple minutes of play as Shawnee ramped up its defense, until Sutton went to the line with fewer than three minutes to play.

Jake Chilton’s (12, #34) three-pointer and another layup from Sutton solidified Manual’s lead. With a minute to play, Freeman got a steal and a layup, and Manual capped its biggest and most significant comeback of the season so far.

Although Manual walked away with a big victory, the game was still mentally exhausting for the team.

“It was a reality check,” Harness said. “We’ve gotta come out on Thursday and play our hardest if we wanna win.”

This win secured Manual’s position in the District 25 final on Thursday, where they will face off against Central High at 7:00 p.m. at Shawnee.

Manual is also guaranteed a spot at the upcoming Region 7 tournament.