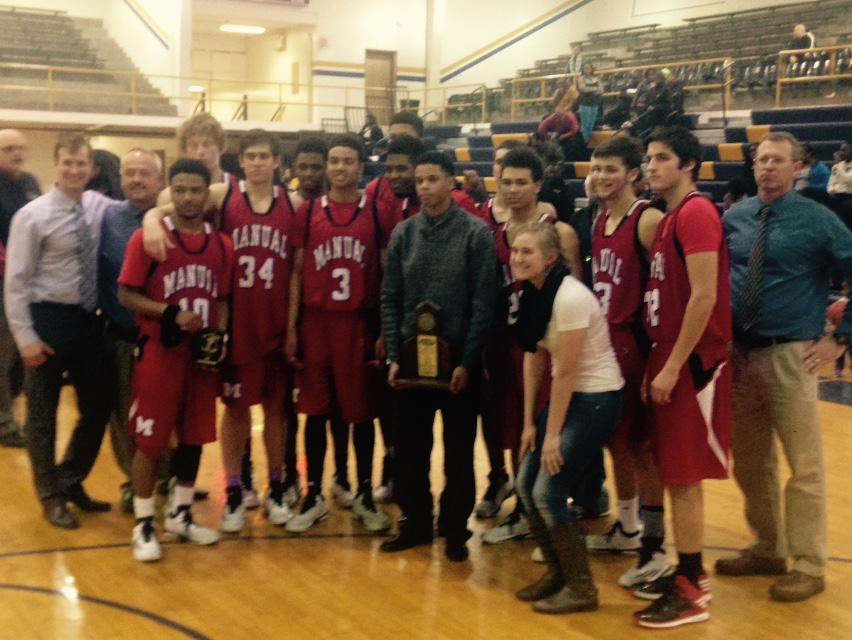 The boys basketball team found themselves down 68-64 with 2:40 to go when the Crimsons went on a 9-0 run to defeat Central in the District 25 tournament final. The score was 73-68.

For the first time all season, Manual was able to execute in a late game situation. The Crimsons had a 2-5 record in games that were in the single digits heading into the fourth quarter, including a 64-62 loss to Central on Jan. 6.

“We’ve been working on late game situations every practice so that we can get more comfortable in understanding the situations,” said Head Coach Jimmy Just (Math). “It’s starting to show a little bit right now because they aren’t panicking the same way, they’re showing a little bit more control, which is good; that means we’re learning.”

Central effectively sped up the game in the second half with its full court pressure, which gave the Yellowjackets numerous transition baskets in the third and fourth quarters, even after made shots.

“They pressed us in the second half and that kind of sped us up,” said Dwayne Sutton (12, #22). “We started to lose control in the fourth quarter but we got it back together and slowed it down.”

Manual also failed to attack the basket enough for the majority of the game.

“We played a little bit passive instead of being aggressive against pressure, and when you are passive against pressure you struggle, and that’s what we have to learn,” Just said. “When they start pressuring us, we need to be able to understand that we should be getting easy baskets by getting to the rim. We’re learning; it’s just the process.”

When Manual made its run in the last 2:40, the Crimsons were able to keep Central out of transition.

“In the fourth quarter, we got back on defense,” Sutton said. “We really focused on that because they were getting too many layups in transition, so we made it a priority to get back on defense.”

The Crimsons also did a better job of attacking the basket late in the game.

“They were overplaying us a lot, and finally we went ahead and stepped to the rim instead of staying outside,” Just said. “When people pressure us hard, we have to learn how to get to the basket.”

Sutton had a huge game for Manual, leading all scorers with 31 points.

“I just packed it in,” Sutton said. “They were kind of small so I stayed around the rim and got a few layups and a lot of free throws.”

“[Sutton] puts a lot of pressure on the opposing team’s defense,” Just said. “When they have to focus on him, it loosens things up for our other guys.”

In addition to finding Freeman for the go ahead layup, Harness also provided the highlight of the game, when he threw in a just beyond half-court buzzer beater at the end of the third quarter to give Manual a 54-50 lead.

“I flicked it and right when I shot it I knew it was going in,” Harness said. “It was on line, and yeah, it was awesome.”

The Crimsons hope that the win will set the tone for the Region 7 tournament next week.

“This game shows that we can win a tough game late,” Harness said. “We haven’t done that in a long time this year; I don’t think we ever have. This is a big step for us as a team.”

Most importantly, the win assures that the Crimsons will play a home game in the opening round of the regional tournament next week. It also guarantees that Manual will play a district runner-up, not a district champion. This allows Manual to avoid a first round game against favorites Trinity and Ballard.

“We’ll use this as momentum, because we know that we have to play a district runner-up, and we got it at our place,” Sutton said. “So we just use this game to build from it.”

The Crimsons will learn their opening round opponent on Saturday at noon, when the Region 7 tournament pairings are released.