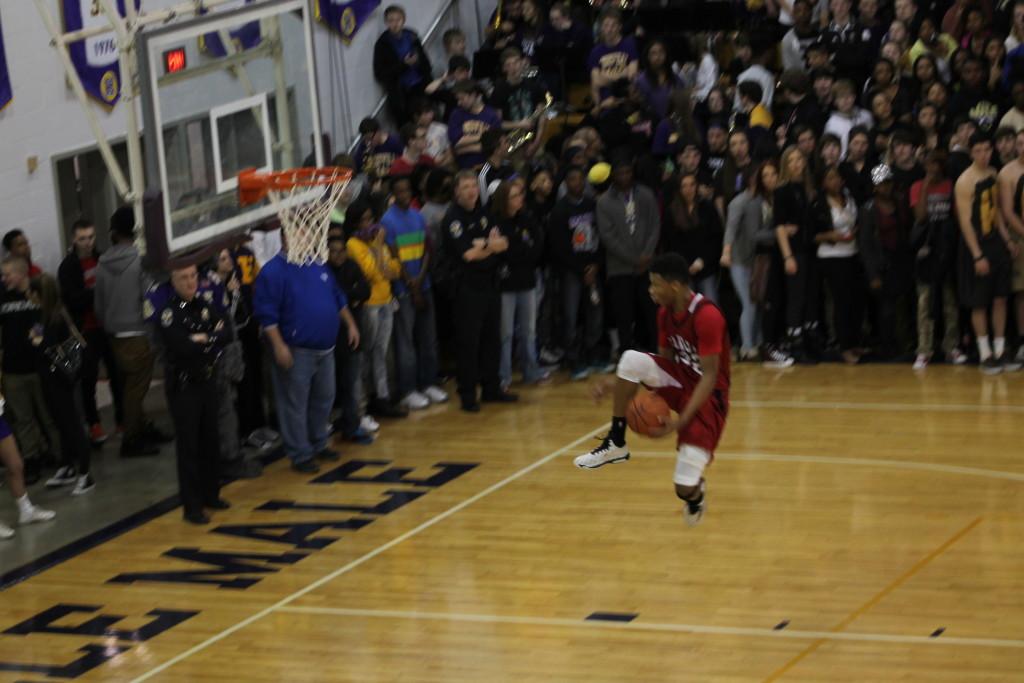 Dwayne Sutton (12, #22) shows off shortly after the whistle is called on a play. Sutton is Manual's leading scorer and one of the top 10 in the state.

The boys basketball team defeated Waggener in the semifinals of the Region 7 tournament tonight.

With 1:45 left on the clock, the team was on the verge of falling to the underdog Wildcats. The Crimsons trailed 44-42, but had the ball. After holding the ball for about 15 seconds, Dwayne Sutton (12, #22) took a challenging pull-up three from the left wing. Sutton had not made a three up to that point, missing all three of his previous attempts, including a similar shot just two possessions earlier. This time, however, Sutton’s shot found nothing but the bottom of the net, and Manual took a 45-44 lead. The Crimsons would hold on to defeat Waggener 51-48 in the semifinals of the Region 7 tournament.

“It was the first three of the game that I hit,” Sutton said. “I just had to shoot with confidence. I was having an off shooting night, so I just kind of stepped up and hit a big time shot.”

The Crimsons struggled to shoot the ball all night, shooting just 31.6 percent from the field. Manual was even worse from the three point line, as the Crimsons missed 15 of 17 attempts for a lowly 11.8 percent.

“Part of it is that the shots aren’t falling,” Head Coach Jimmy Just (Math) said. “Most of the shots we were shooting were pretty good looks, but they just didn’t go in.”

The Crimsons offense was stagnant most of the night, and Manual had little to no ball movement for the majority of the game.

Manual did force the Wildcats to turn the ball over 15 times. Even though the turnovers only resulted in ten points, they helped the Crimsons get stops when they needed them most. After Sutton hit the go-ahead three, Ty’Ron Horton (12, #24) stepped in front of Waggener’s Nicholas Kratholm (11, #34) to take a charge, giving Manual back the ball with 1:24 left.

“We had some big charges tonight; Ty’Ron [Horton] was a charge machine,” Just said. “We were just trying to step in front of people to get those calls. We didn’t do it early, but we did it late in the game when it counts. That was huge for us.”

Additionally, Horton added six points off the bench, accompanying eight rebounds. Jake Chilton (12, #34) also had a huge game for the Crimsons, adding 17 points, on eight of 14 shooting, and six boards.

Sutton, a nominee for the Kentucky Mr. Basketball award, led Manual in scoring and rebounding with 23 points and ten rebounds. This game gave Sutton his fourth straight double-double of the season. However, Manual struggled to get any amount of diversity in the offense, as Sutton, Chilton and Horton scored an astonishing 46 of Manual’s total 51 points.

“That hasn’t happened like that all year long,” Just said. “I don’t think it was anything we did today, I just think that those guys stepped up and made plays for us when we needed them. Other guys today just didn’t hit some shots that they have hit most of the year; however, I expect these guys to come back and give more contribution on Thursday.”

Manual now moves on to face the top-ranked Ballard in the Regional finals. The Bruins advanced to the final by pulling away from the second-ranked Trinity 67-54 in the first semifinal.

As the Bruins are known for their athleticism and their tendency to pressure the ball and get into transition, the Crimsons will try to make the final more of a half court game. Ballard is also particularly potent on offense, especially in transition.

Jalen Perry (12, #21) leads the Bruins. He is another finalist to win Kentucky’s Mr. Basketball award later this month.

“[Perry] is a great pull-up shooter,” Sutton said. “He can dribble to a spot, get off the ground and knock those shots down very well. He’s a great player.”

Ballard’s limited size will be helpful for the undersized Crimsons.

This game marks the Crimsons’ first appearance in the Regional final since 2000. Manual has not won a Regional title since 1972, and a State title since 1931.

“It means a lot to us to get to the Regional finals,” Sutton said. “For we seniors, it’s our last year, so we’re going to play as hard as we can, and we’ll see what happens.”

Manual will face off against Ballard in the Region 7 Tournament final on Thursday at Valley Traditional High School. Tipoff is scheduled for 6 p.m.