David knocked down but could not slay Goliath 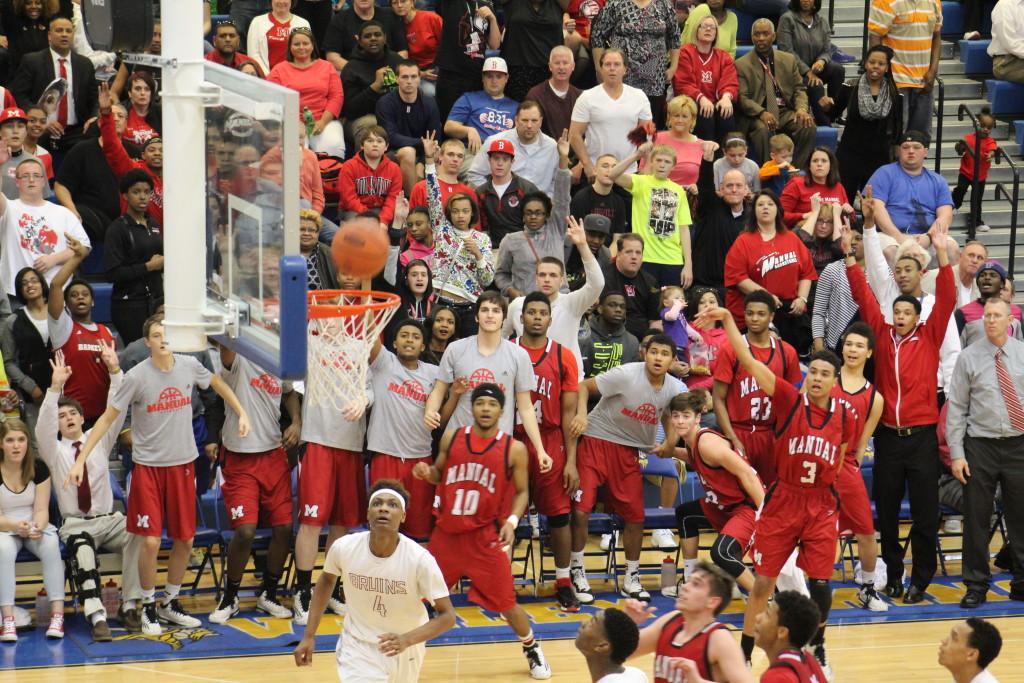 The Manual crowd anticipates a three from Chris West (#3). He misses and Jake Chilton (#34) grabs the rebound.

With 1:19 left in overtime and Manual trailing 60-57, Jarrett Harness (12, #4) reached to strip the ball from Ballard star Jalen Perry (12, #21) who had slipped, to give Manual a chance to tie the Region 7 Final. However, the referee called a questionable foul against Harness. Harness then proceeded to slam the ball against the ground, for which the ref called a reasonable technical foul.

“It’s something that’s not under our control,” Manual head coach Jimmy Just (Math) said. “Its just, with us being down, we needed to make a play, and I thought Jarrett made a great play and he [the referee] saw it differently, and we have to live with it. It’s just part of the game and it may be tough right now but its part of the game and we hope that our kids will learn from it and grow from it.”

After Jamil Wilson (10, #22) and Perry hit the four ensuing free throws, the Crimsons were never able to recover as the Bruins went on to defeat Manual to win 67-60 and become the Region 7 champs.

The foul/technical foul was the last bit of drama of what was an extremely entertaining and thrilling game for both teams. After both teams split the game’s first eight points, Manual went on a surprising 20-0 run over a six minute span in the first and second quarters. Eric Niemann (11, #33) hit a putback to beat the first quarter buzzer and Ja’Kory Freeman (12, #10) hit a three to start the second quarter to cap the run. Manual held a 24-4 lead which, at that point, the Crimson upset bid was on.

“We hit shots, we moved the ball and we played defense,” Just said. “You have to do it at both ends of the floor to build that out. To get a 20-point lead against Ballard was fantastic, but you know they’re going to battle back, you can’t necessarily stop these guys from scoring, they have a lot of guys that have a lot of offensive power. You just have to hope that you can contain them, play some defense and go to work. I thought the kids did what we needed to do tonight, we just fell short.”

The Bruins slowly clawed their way back into the game after the huge and unexpected Crimson run. Perry scored nine points in the second quarter as Ballard battled back to just a 12-point halftime deficit at 35-23. After Ballard pulled within five by the start of the fourth, Freeman hit a layup and Jake Chilton (12, #34) nailed a three to get the lead back up to ten at 48-38 with seven minutes left to temporarily hold off Ballard. But Perry and the Bruins would not go away, and after Perry hit back-to-back threes midway through the fourth quarter to cap a 12-2 Bruin run, the game was tied at 50, and Manual’s 20-point lead had evaporated.

“You just know that you’re not going to jump out on Ballard and expect them to not fight back,” Just said. “I thought our kids stepped up and played their hearts out and of course some mistakes were being made but we couldn’t have asked to do anymore than what they did tonight.”

Manual did not fade away either, as Sutton answered Perry with a three of his own. As expected, both of the Kentucky Mr. Basketball nominees went at each other all night, as Sutton recorded his fourth straight double-double with 20 points and 12 rebounds, as well as two steals. Perry was brilliant in the second half for Ballard, as he paced the Bruins with 25 points, eight boards, three assists and three steals.

Manual had a chance to win the game in regulation as Harness hit a putback and got fouled with 14.8 seconds left to tie the game at 55. However, Harness missed the ensuing free throw, and West missed a contested three at the buzzer. The Crimsons struggled from the charity stripe when it mattered most, as Manual made just one of five free throw attempts in the last four minutes of regulation, and made just six of 11 attempts, 54 percent, throughout the ballgame. Ballard was not much better, just 11 of 18, but the Bruins hit seven of ten free throws in overtime.

“I thought that our free throw shooting was much improved this year,” Just said. “Sometimes it doesn’t matter whether you are much improved or not, but just a matter of if you hit them at the right time, and we didn’t do that as well as we could have tonight. I don’t think that it was a determining factor in the outcome of the game.”

Sutton’s 20 points led the Crimsons, followed by Freeman, who added eleven points but on just eleven of eleven shooting. Chilton continued his red hot regional tournament, adding nine points and six boards. West added eight points and three steals for Manual, however, they were all in the first half. Harness and Niemann each added four points a piece. After shooting a fantastic 51.7 percent in the first half, the Crimsons shot just 26.7 percent from the field the rest of the game.

As for Ballard, Perry’s 25 paced the Bruins, followed by Anthony Eaves (12, #4), who added 14 points and six rebounds and Wilson, who had 12 points and seven rebounds. The Bruins shot just 41 percent for the game, but had 17 points off turnovers, 12 of those coming in the second half and in overtime.

As for Manual, the Crimsons finish their best season since 2000 with a 25-6 record. Manual made it to the regional final for the first time since that 2000 team, and still have not won the regional tournament since the 1972 Crimsons, led by point guard Phil Bond, who went on to play for the University of Louisville’s 1975 Final Four team and the Houston Rockets.

“I feel extremely blessed to be a part of this team and be with these guys,” Just said. “They are fantastic individuals and they will be very successful down the road and I told them that I think that they’ve accomplished amazing things this year, and they have started setting the bar higher for these guys behind them. They have nothing to be ashamed about, and hopefully they will be proud of what they have accomplished this year.”