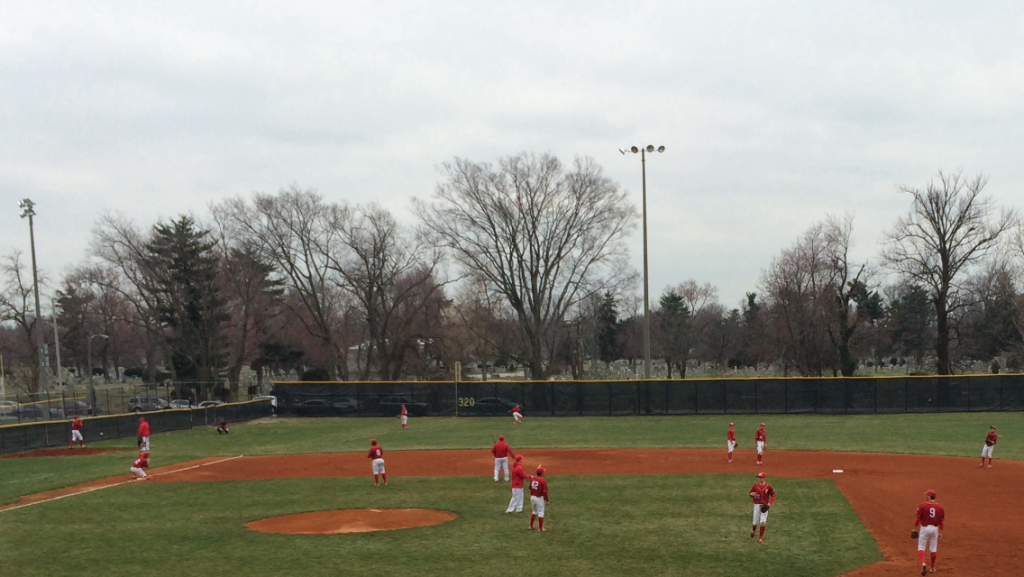 The Manual varsity baseball team fell to their rivals, the Male Bulldogs, in a 7-0 shutout Friday night.

The first inning was explosive for the Crimsons, with Trae Gordon (12, #8) airing out a double his first time at bat.

“After hitting that double, I kind of expected for us to catch fire from that and get moving as a team,” Gordon said.

Everything seemed to be going well for Manual as their next batter, Matthew Olson (11, # 2), was walked by the Male pitcher. However, this success was short-lived for Manual. After taking three straight outs, they didn’t even have another hit until the third inning.

This wasn’t a problem for Manual at first, as their defense was also playing spectacularly. Pitcher Jarrett Harness (12, #4) wasn’t giving anything to the Male batters, and the Crimson infielders were quick to react to any ball that came their way and turn any would-be on-bases for Male into outs.

The third inning took a turn for the worst. After the Crimsons suffered a controversial out on Chris Gambert (11, #25), Male proceeded to go on a tear. After scoring the first run of the game, Male did not let up. Multiple plays led to an RBI single that put the Bulldogs up 2-0 and loaded the bases. This was followed by a deep double that drove in three for Male, increasing their lead to 5-0. They ended the inning with another run to make it 6-0.

“At that point I was just worried about how we were going to stop the damage,” Gambert said. “Everything was just clicking for them. We needed some sort of momentum boost to stop the bleeding.”

After that the Crimsons simply couldn’t recover, despite holding Male to no runs in the fourth inning. By the end of the game, Male beat Manual 7-0, holding them to only three hits in seven innings.

This disparity in scoring seemed to be a result of Manual’s reluctance to swing at pitches, which lead to Male’s pitcher striking out a total of 10 Manual batters.

“We were just caught watching too many pitches,” Gordon said.

“There’s no excuse for that. You’re coming out here seeing 80 miles per hour [pitches] every single day. You should be able to hit, especially at the Varsity level,” Gambert said. “Realistically we have to step up and start being a lot more confident to play.”

The importance of confidence was also touched on by Head Coach Matt Tambario.

“Offensively we just have to get out of this funk we’re in. Right now it’s mental. As soon as these players decide they want it we’ll be fine. We have got some players, got some talent. It’s the mental side of the game that’s killing us,” said Coach Tambario. “It’s all about confidence. The kids just have to get confidence. As soon as they find it, we’re going to be just fine.”

Despite faltering mentally, Coach Tambario had nothing but praise for his team’s efforts.

“We played all seven innings. They scored in only two innings. I don’t think my kids were ever out of it. It was the Male/Manual game and they never gave up,” Coach Tambario said.

Despite this loss dropping their record to 0-2 on the season so far, the team’s spirits were not dampened.

“We just have to hit our stride,” Gambert said. “Right now we’re still coming together as a team. It’s a new year and we’re still trying to get used to each other. But we’ll hit our stride eventually, and as soon as we do we’re going to shock some teams. We’re just waiting on it right now.”