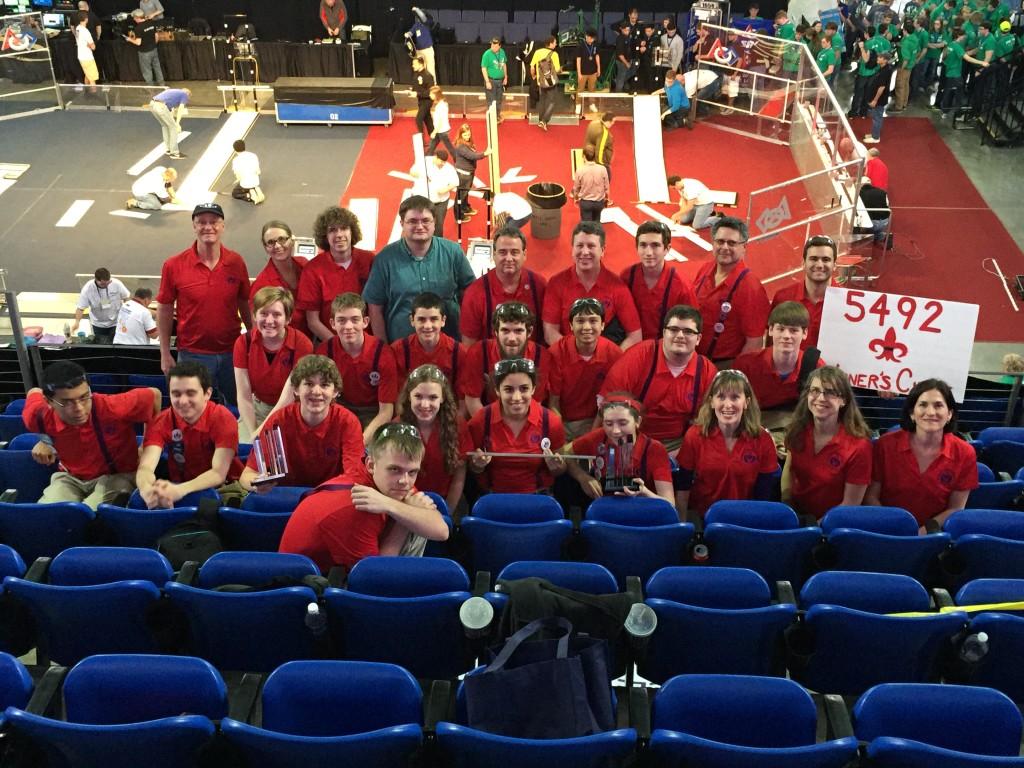 The FIRST (For Inspiration and Recognition of Science and Technology) Robotics team had an extremely strong showing in the St. Louis Regional last weekend.

Manual placed tenth in qualifiers and fifth overall out of a competitive field comprising 43 teams. It was the Crimsons’ first tournament, as this is the team’s inaugural year.

“Placing so well in our first tournament in our rookie year means a lot,” competitor Brian Schweinhart (12, MST) said. “Performing well shows that we are a strong and competitive team that can compete with the veteran teams of 10 and 15 years. With having so many sponsors, performing so well means the companies look just as good. Placing well is also significant in that we are holding onto the Manual tradition in excellence.”

“Our kids did much better than we expected,” he said. “I really think that when we get to the Smoky Mountain Regional, which is considered one of the easier regionals, we should do really, really well.”

To compete, the team had to prepare and build a FIRST Robotics Competition (FRC) robot.

“We had six weeks, from the start of January to mid February, to design and build the robot,” Schweinhart said. “The team spent the first two weeks running through designs and prototypes, eventually leading to a design that most were happy with. The next two weeks were spent designing the specifics of the robot in CAD and testing the specifics of the robot. The remaining two weeks were spent building and removing the flaws from the design. In reality we only had a few days to build the robot due to design errors and other delays, such as all of the snow days.”

The tournament was a three day event that began last Thursday. On the first day, the team participated in practice matches, which preceded the qualifying and playoff matches the next two days.

“We had 12 qualifying matches, which was where we managed to place tenth, allowing us to pick our two alliance partners for the playoff matches,” Schweinhart said. “Saturday afternoon was spent playing these matches, with eight alliances competing for the championship.”

Manual’s robot is depicted in action at the far right of the competition field.

“For first-year teams, it is really hard to get to the world championships,” Zwanzig said. “Basically what you try to do is get Rookie Team Designations, and that’s what we were shooting for in this tournament. We finished as the runner-up for that award.”

According to Zwanzig, the school that won the Rookie Team Designation (and therefore earned an automatic bid to the World Championships) was not in fact a true first year team, but they earned the award by finishing one place higher than Manual did.

The Crimsons did win the Rookie Inspiration Award, which was given to a first-year team that demonstrates outstanding performance, teamwork and commitment.

“Winning the Rookie Inspiration award goes along with the importance of placing so well,” Schweinhart said. “The significance of this award is that the judges saw us as respectable in both our engineering capabilities and in the community that we have built. Our success was not only in making a good robot, but creating a team that impacts the school and the local community.”

The team has worked closely with mentors from schools and businesses such as University of Louisville, Ford Motor Company and Big Ass Solutions.

Manual will compete in the Smoky Mountains Regional during the first week of April. Until then, Zwanzig urges students to consider the incredible value of FRC Robotics.

“[FRC teaches] teamwork, critical thinking skills and problem solving skills because you have to build a robot from scratch,” he said. “Not only that, you have to fully integrate it into all of the different disciplines: you have to money manage, fundraise and organize PR. All of that is documented and figured into your overall placement in FRC Robotics tournaments, so it’s helping us across the board in all disciplines.”