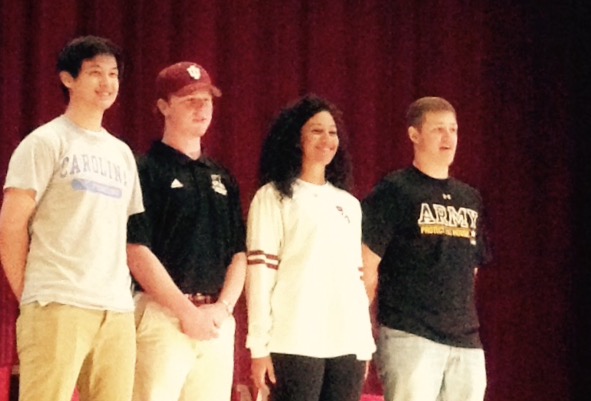 Amid a sea of of smiling relatives, hugs from friends, and handshakes from coaches and mentors, four Manual senior athletes signed National Letters of Intent (NLI) to play their respective sports at the collegiate level.

“West Point has always been a dream of mine, and when it came true there wasn’t really any other option for me,” Dyer said.

Aurryella Mason (HSU) signed to play volleyball at Bellarmine. Many of Mason’s family members had attended the university.

“I think it’s really important that in a school setting, being student-athletes, we still get this recognition, especially being surrounded by our friends and stuff,” Mason said. “I feel really grateful that I’m able to go there not only just for school but to continue my career in volleyball.”

“I just feel blessed I had this opportunity, and hopefully I can carry it on to college and shout-out Manual everywhere I go,” McGarvey said. “IUS was my best offer, and I have wanted to play baseball there for a long time now, so I just went ahead and followed my dreams.”

Jason Xu (MST) signed to fence at the North Carolina at Chapel Hill. Fencing is not offered at Manual, but it has been a sport he has long and well pursued outside of school, going as far as competing with the USA team in the Junior Olympics. He is ranked 6th in the nation in the Under 17 Division, according to Athletic Dir. (AD) David Zuberer.

“Just being at Manual academically really helped me prepare,” Xu said. “Being a student-athlete, ‘student’ always comes first, so you have to get the grades up or you aren’t going to do well athletically.”

After signing their letter, each athlete was allowed to give a short speech, during which time the athletes showed their appreciation for the recognition as well as the opportunities Manual provided them.

Each athlete also expressed gratitude to their coaches and the mentorship of Manual for getting them where they are today.

“This past year really prepared me,” Mason said. “We started doing two-a-days and got in really good shape. We were just able to get that team feeling so I can carry that on into college next year.”

This day was not only special for the athletes, but for Zuberer as well.

“These are the days I look forward to as AD,” Zuberer said. “These are the days that make me proud. It’s one of the highlights of the year, because you know you’ve taken students over the last four years that have been successful in the classroom as well as on the athletic field. You have a responsibility to try to guide our students in positive directions, so when you see four students like today going to great institutions with a great academic background, and being part of the reason they’re attending those institutions, it definitely makes me proud.”

With four athletes signing during this ceremony, it is immediately evident that the Manual Athletics Department has come a long way since the foundation of the school, and even since the time Principal Jerry Mayes was coach of the football team.

“Back in my days as head football coach, I remember years where we wouldn’t have any scholar athletes signing, and now it’s almost a pattern,” Mayes said.

Zuberer saw it as a tribute to the coaches and the type of students Manual is getting, who are not only academics, but who are also participating in extracurriculars.

“The overall number of college signings has increased over the years from when I first started as the AD nine years ago until now,” Zuberer said. “It’s routine that we have several kids in a variety of sports that are going to the Division 1 level and getting some scholarship money to help pay their education.”

Zuberer also attributes part of this new-found success to the parental support of student athletes.

“Our parent support here is unmatched,” Zuberer said. “We’re able to do a lot of things here because of our parent support, and it’s a definite group project working our students through school.”

Zuberer finished with a few more words of praise for the Manual athletes.

“Our kids are competitors,” Zuberer said in his closing speech. “They compete in the classroom and they compete on the athletic field. You put a challenge in front of our kids and normally they answer the challenge.”