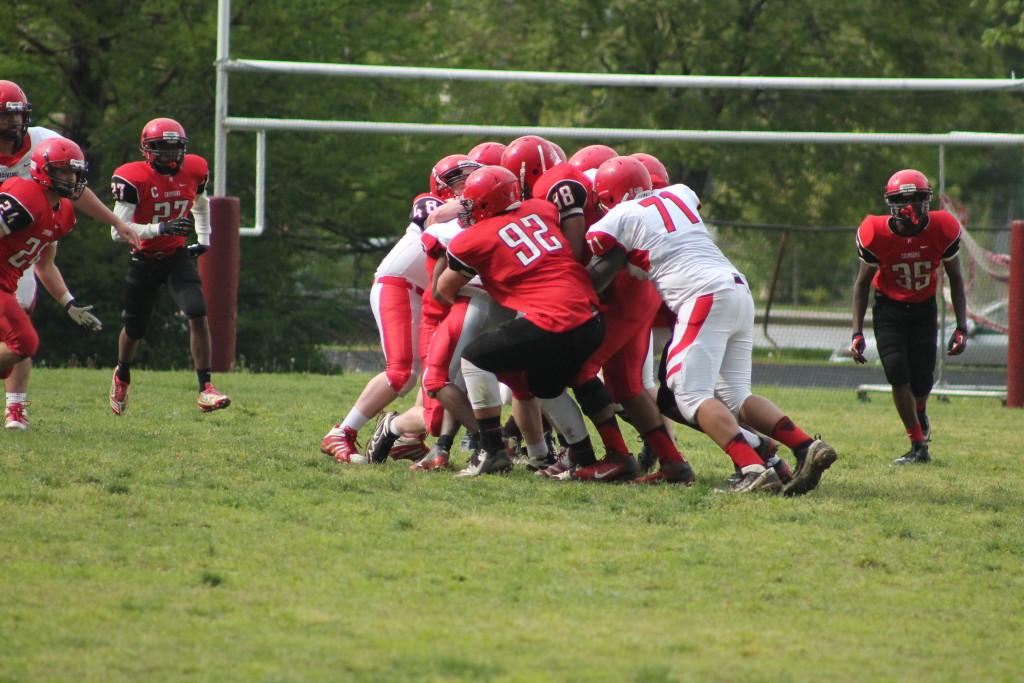 The defense's Derek Dorsey (12, #92) and the offense's Jalen Jacobs (12, #71) battle it out in a pileup while the offense tries to push the ball forward in the Manual football Spring game.

The Manual football team wrapped up their spring practices with the annual offense versus defense game on Thursday afternoon.

The defensive line owned the offensive line during the majority of the game, defeating them 44-34 based on a modified scoring system

“Our new coach has been teaching us how to do different moves so that we can penetrate the o-line, and we were able to put those to use today,” defensive lineman and University of Louisville commit Derek Dorsey (11, #92) said.

“We definitely do a lot more conditioning and a lot more running,” Dorsey said. “He is a great coach; he brings a lot of energy and passion that will really help us next year. We just want to continue to get into better shape. We need to get more mentally tough and not get tired and give up.”

This is Morton’s second stint at Manual, according to head coach Oliver Lucas (Science).

“He’s been with us before,” Lucas said. “This is his second time around, so he understands the system.”

Manual is coming off of a season in which the Crimsons had the top defense in the state, and even though the Crimsons are losing eight of eleven starters on defense, Lucas is still optimistic that the defense can be just as good, if not better, than last year’s.

“A lot of players have been stepping up,” Dorsey said. “There are some tough shoes to fill, but we’ll definitely be solid after working hard in the summer.”

Manual’s offense also looks to keep up during the upcoming season.

After playing a pro-style system last year, Manual will move to a more modern spread style to try to take advantage of quarterback Tim Comstock’s (11, #3) speed.

As a part of running the spread offense, the Crimsons will also run more read option. Back-up quarterback William Britt (10, #17) had a 60 yard touchdown run in Thursday’s spring game.

“We’re working on the read option so that we can take advantage of being able to run a bit more with our quarterbacks,” Comstock said.

Manual also wants to run a more up-tempo style in the upcoming season.

“We’re trying to make the offense completely no-huddle,” Comstock said. “We want to play quick and fast so that we can keep the defense on their heels. Our personal fits a faster style better. We want to work on getting the ball snapped faster; our goal is to run a play every ten seconds.”

Manual’s biggest issue in the spring game, like last year, was the offensive line.

“Once again, our o-line is inexperienced, and we have a few things we have to work on,” Lucas said. “We did pretty good for most of the spring, but then we got out there and that’s what happens, real bullets are flying and it creates a whole different beast. Just playing against live competition is much different mentally.”

Comstock was inconsistent last season, and he had some trouble hitting open receivers in the spring game. On Thursday, the offense had a chance to tie in the closing seconds, but Dorsey sacked Comstock to end the game.

Though Manual has lost a lot of players from their top-five ranked team in Kentucky, Lucas believes that the team can continue to succeed in 2015.

“Overall, I think that we’ll be a better team this year than we were last year,” he said.