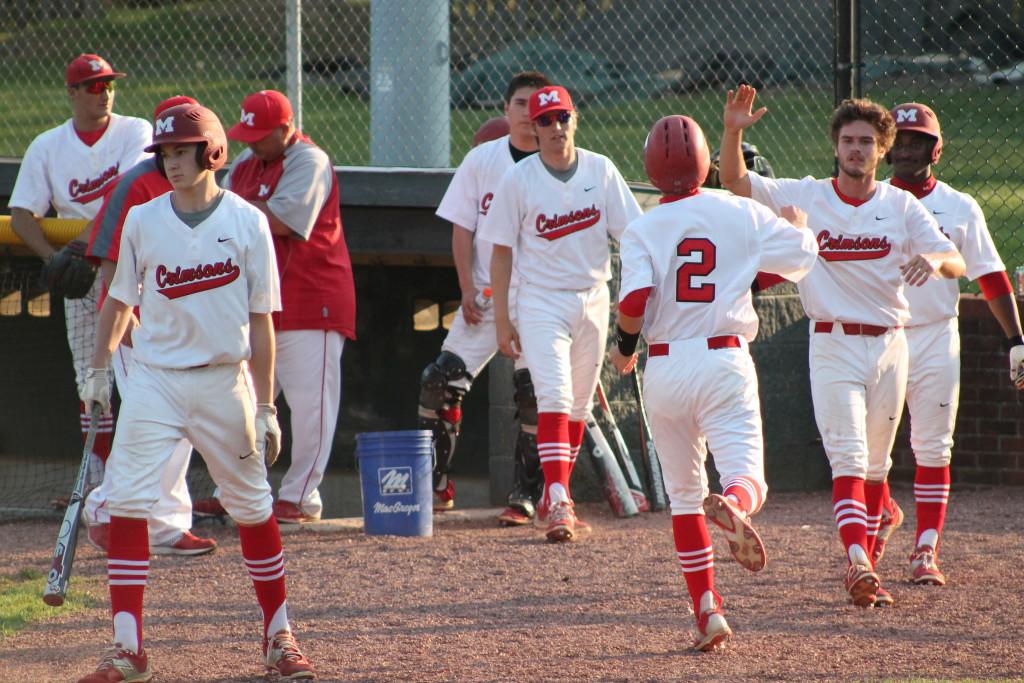 The Manual baseball team made a large statement Wednesday night by knocking off the twelfth ranked Ballard Bruins.

“It just shows that we belong,” head coach Matt Timbario said. “I’ve preached to the team that games like this we have to make a statement. I felt like we made a statement.”

After falling behind 2-0 in the first inning, the Crimsons got a complete team performance to grab a 5-2 victory.

“Tonight was a total team victory,” Timbario said. “Everybody played well tonight. Each and every kid contributed and did their part when they got their chance to.”

Manual has struggled in recent years to compete with traditional state powers such as Ballard, St. Xavier and Male; however, the Crimsons are trying to turn the tide after the Ballard win, to go along with a close 6-5 loss to St. X on April 30.

“We just ignored the name on the front of the jersey because we have to just come out and bring it every night,” second baseman and, according to Cooper, “Freshman Phemon” Aaron Sary (9, #20) said. “Whether we’re playing St. X or lesser teams we just have to come out and fight hard.”

Sary had a strong night for the Crimsons, with three hits and two runs.

Cooper also had a strong game for Manual, as he added two hits, including a two-out RBI single to put the Crimsons up 3-2 in the bottom of the fourth inning, a lead that would hold for the remainder of the ballgame.

“I just really focused what coach told me before my at-bat which was just to focus on hitting it to the right side since it was a submarine thrower it was kind of tough to pick up on the ball,” Cooper said. “If you try to pull it, you do what I did in the first inning and just hit a hard foul ball off the fence; so if you focus on the right side its more likely that you’re going to stay through it and not lunge at it.”

Ballard’s starting pitcher Kyle Riesenberg (#14) pitched with the unconventional submarine style, which, in other words, is when a pitcher throws the ball from below the kneecap, almost an underhanded throw. This technique is used to try to throw off hitters by changing where the batter picks up sight of the ball.

“Against the first pitcher [Riesenberg], he was a tough submariner so I just tried to pick the ball up out of his hand and put it in play because I knew that good things would happen,” Sary said.

For most of the year, including a 2-1 loss to Bullitt East on May 5, Manual has struggled to get runners home when they had runners in scoring position; however, this was not an issue for the Crimsons against Ballard as Manual was able to deliver in clutch time.

“We took advantage of their pitchers mistakes,” Timbario said. “He [Riesenberg] got a little erratic there at the end. We got some guys on base via walks, and we just found a way, we just kept battling, and again it was a total team victory.”

Manual also got strong pitching performances from Campbell Seiler (12, #12) and Jarrett Harness (12, #4). Seiler picked up the win as he allowed two runs on just four hits in four innings pitched. Harness got the long three-inning save and just gave up three hits in his three shutout innings.

“Our game plan was to give Campbell two or three innings, so he knew his role, and then we were going to let Jarrett get in there to close it out,” Timbario said. “So both of the guys knew what their roles were coming into the game and they performed.”

After falling behind 2-0 in the top of the first, the Crimsons—and Seiler—settled in. Manual answered when third baseman Matthew Olsen (11, #2) grounded into a fielders choice to score Sary in the bottom of the second inning. Olsen then scored on an error to tie the game at two later in the inning.

“We just had faith and knew that we were a better team than what we showed in the first inning,” Cooper said. “We just needed to put the ball in play and good things would happen.”

Manual scored again in the bottom of the fourth win Cooper hit his RBI single to score Evan Dilbeck (11, #13) and then added two insurance runs in the bottom of the sixth when Kameron Davis (11, #21) scored on a wild pitch and Quinton Bynum (10, #5) got an infield RBI single to plate Sary. That was more than enough for Harness, as he slammed the door on the Bruins in the top of the seventh, to give Manual a huge 5-2 win.

Manual (13-10) will travel to play Central Hardin on Thursday before heading to Madison Central over the weekend, as the Crimsons hope to build on the Ballard win by playing consistent baseball.
“We had everybody contribute today, and when you have everybody contribute and have a team victory, it boosts the morale in the dugout and out on the field,” Timbario said. “Its the perfect time in the season for us to come together, now we just have to consistently do it the rest of the week.”