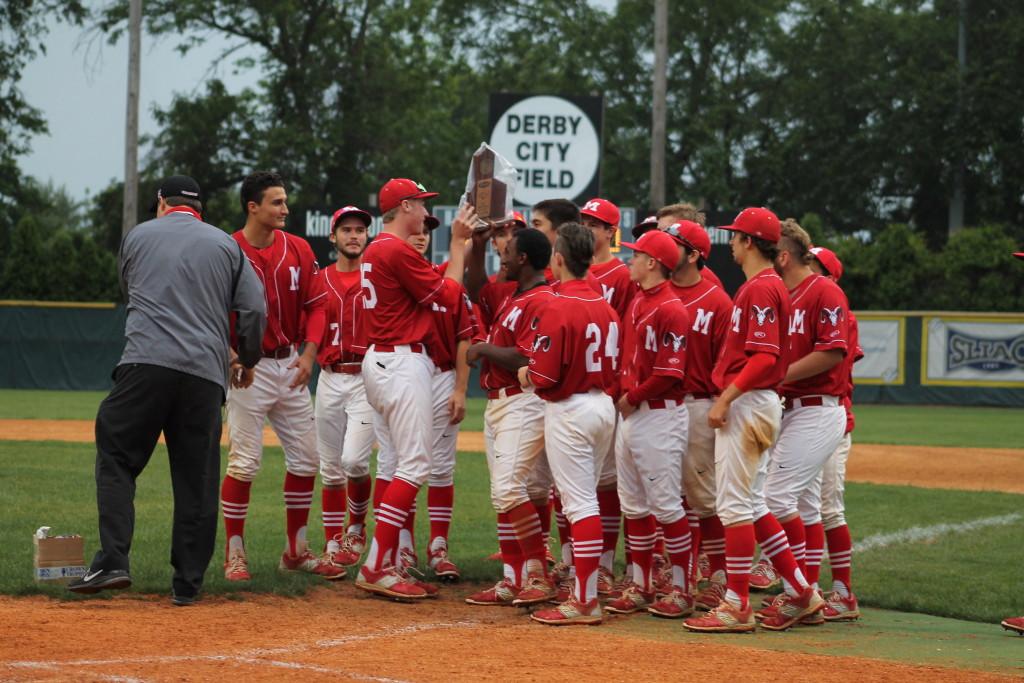 The team hoists up the District trophy, handed to them by tournament coordinator and Manual Athletic Director David Zueberer.

The Manual baseball team came out swinging against the Central Yellow Jackets, and did not let up for a second, dominating on the bat with big performances from Jarrett Harness (12, #4) and Ben Cooper (12, #42), and even more so at the mound, with a no-hitter for Matthew Olson (11, #2) and Brian Hoffman (11, #16), ultimately forcing a 10-0 mercy rule victory after five innings to become District Champions.

“It’s an honor just to get there,” Olsen said. “My dad wants me to go out there and give it my all, so I do my best every game, for him and for myself.”

“I just told them [Olson and Hoffman] to give it all they’ve got, they went out there and threw strikes, the defense played well behind them,” Timbario said.

Manual benefitted heavily from a comedy of Yellow Jacket errors early in the ballgame. After being walked in the second inning, Cooper stole second and scored off of an error by the catcher. The third inning was another big hit for Manual, with Harness scoring off of a hit by Matthew Marino (12, #7), and Marino scoring two plays later on a hit by Cooper.

The Crimsons continued to pile it on in the fourth inning, with two more runs from Harness and Aaron Sary (9, #24), ultimately ending the game with a walk-off double by Harness.

“I was just trying to hit one hard, because I knew that if I just got one more then it was over,” Harness said.

On the defensive side, Olson had not allowed a single hit after four innings, and nervous chatter of a potential no-hitter was brewing in the stands. However, in the Crimson dugout, it was business as usual, no one daring to jinx the potential feat.

Surprisingly, Manual’s coaching staff made the controversial decision to pull Olson from the game in favor of Hoffman. But Hoffman did not fail in Olson’s place, and did not allow a single hit in his time, putting together a combined no-hitter for the Crimsons, the first of the season.

Olson was happy with the coaches’ decision to rest him in favor of Hoffman, even though Olson was taken out after four innings.

“They just want me to be 100% rested for the regional tournament, and that’s what I want too,” Olson said. “I’m hoping to make the all-region team.”

At the end of the tournament, Olson, Harness, and Cooper received All-District honors.

“It was great, but we’re not done yet,” Harness said. “We’re just trying to make some noise in the region and see what we can do.”

The Crimsons will host the first round of the Regional Tournament at Derby City Field on Monday, May 25.