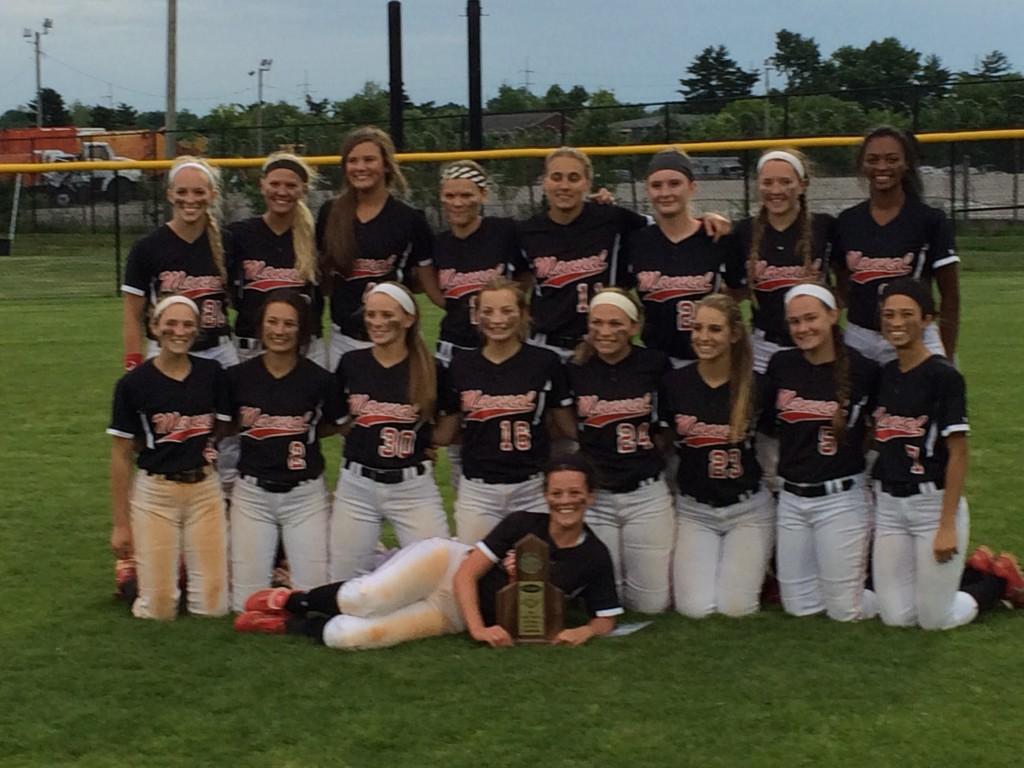 The game started quite evenly matched, with neither team gaining a clear advantage until the top of the fifth inning, when Presentation scored the first run of the game.

Manual instantly answered back in the same inning. After a single from Kristen Smith (11, #2), third baseman Sophie Humphrey (12, #11) hit another single. Smith took off, turning Humphrey’s single into an RBI to tie the game up at 1-1.

What followed was a series of unrelenting defense and pitching prowess from both teams. Pitcher Madison Williams (11, #21) was on fire, forcing the Presentation batters to take tough swings and keeping them from gaining an edge.

The same was true for outfielder Abigail Harper (11, #8) who was responsible for two outs in the tenth inning, including a caught pop fly and a double-play to get Manual off the field.

“Our pitching and catching were tremendous the whole game,” Head Coach Andrew Hundley said. “Madison [Williams] and Savannah [Schenck] were warriors tonight. Those amount of innings really take a toll on those two positions.”

After stifling Presentation in the seventh inning, Amanda Newcomer (11, #27) attempted to put the game away for Manual. After a single to get herself on first, she utilized a bunt by Kelly Riggs (12, #30) to get on second base. Following another out, Newcomer attempted to run home but couldn’t make it happen, which sent the game into the first of eight extra innings.

Presentation came close to winning in the eighth inning by getting runners to second and third base. However, Williams struck out the next batter to get out of the jam.

At this point in the game, Manual’s defensive capabilities were on full display. Williams struck out three straight batters in the eleventh inning alone and seventeen batters total. The team caused three quick outs in the twelth inning, and Manual rarely allowed any baserunners.

“Our greatest strength was being mentally tough enough to not fall apart when we were in stressful situations,” Clare Hatchen (12, #3) said. “We didn’t let one bad play or one at bat defeat us. Madison pitching the way she did for that long of a time is the reason we won. Without Madison’s pitching, the game would not have remained 1-1 for so many innings.”

After Presentation stranded a runner on third, Harper was hit by a pitch to get herself on first. Hatchen then drilled one out to left field for an RBI triple and the walk-off to secure the District 25 championship.

“Being able to help your team win a game like that is an indescribable experience and I am so blessed to have been able to do so,” Hachten said. “There is really no greater feeling. I was just reminding myself to breathe, take it one pitch at a time and most importantly not to swing at her rise ball.”

“I knew having Abigail [Harper] and her speed at first was an advantage; we just needed something in the grass to get her over to third base,” Hundley said. “Clare had a few rough at bats previously, but I told her to just find the grass and, well, the rest is history.”

In the closing ceremonies, pitcher Madison Williams, outfielder Clare Hachten and outfielder Abigail Harper were all named to the District 25 All-Tourney team.

Manual will continue their post-season in the upcoming Region 7 tournament, where they will first play a runner up from another Seventh Region district. They will have the region draw Friday night at 6 p.m. in Manual’s senior cafeteria.