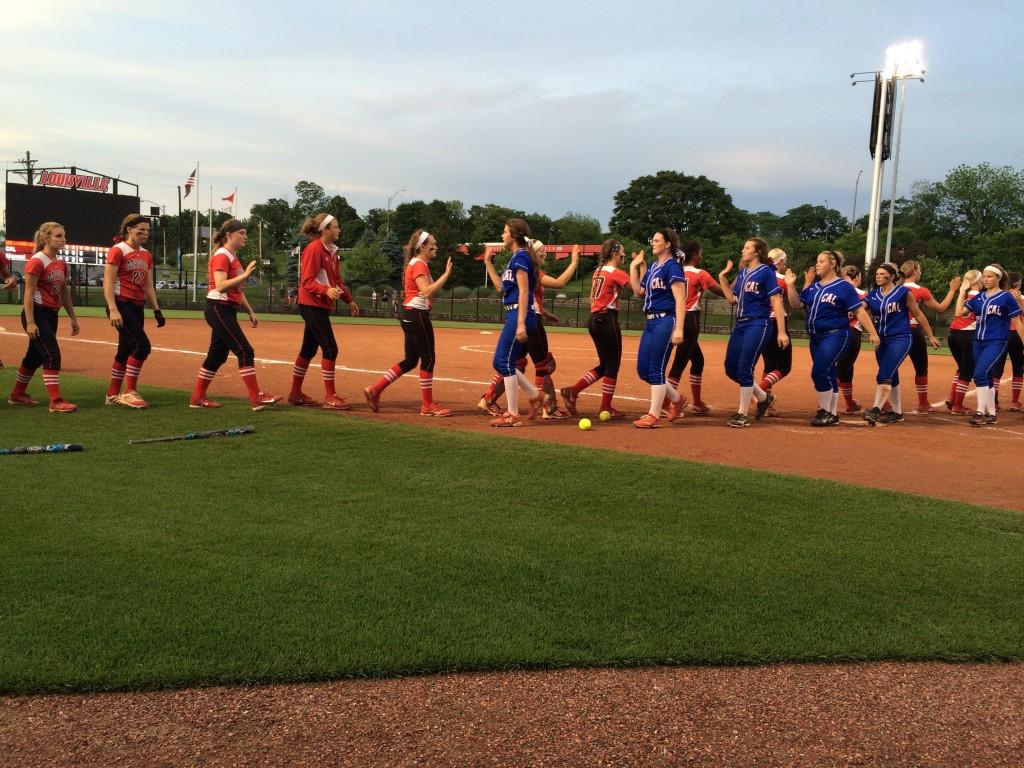 Christian Academy of Louisville (CAL) put Manual softball’s season to an end after defeating them in the Region 7 quarterfinals. The final score was 6-2.

The game began with a duel between the two pitchers, with neither side allowing the other to gain an edge early on. Madison Williams (11, #21) allowed only one batter to make it to base in the first inning, and only three batters total during the first three innings.

“I’ve had better games, but I had my defense to back me up the whole game,” Williams said. “They covered their positions really well and anytime the ball was hit, I had full confidence that they’d get the out.”

Manual’s infielders also shone at the start of the game, with third baseman Sophie Humphrey (12, #11) and first basemen Gabrielle Vincent (10, #12) both making impressive plays to end the second inning.

However, Manual’s luck began to change in the fourth inning. After a bunt by a CAL batter loaded the bases, an error by catcher Savannah Schenck (11, #16) led to the first run of the game for CAL. Fortunately for the Crimsons, Williams provided two quick strikeouts to get Manual out of the jam.

Manual’s offense was less successful than their defense, oftentimes struggling to get on base and going through a hitting drought that culminated in two 1-2-3 innings in the fourth and fifth.

That all changed in the sixth inning. After singles by Abigail Harper (11, #8) and Kristen Smith (11, #2), Schenck drilled a double to bring both runners in and give Manual a 2-1 lead.

“The whole dugout got super pumped up and we were on cloud nine,” Williams said. “We thought we were going to win.”

But CAL refused to go down without a fight. They managed to get runners on second and third to start the seventh inning, and Williams walked a third batter to load the bases.

CAL then proceeded with a double that brought in two runners and gave the Centurions a 3-2 lead. A bunt followed, which brought in yet another two runners to give CAL a 5-2 lead. A final double by CAL gave them a 6-2 lead before the Crimsons were able to stop the bleeding.

“I could tell everyone’s heads were down, and once everyone gets that mentality, it just goes downhill from there,” Williams said. “We tried to battle back but we just couldn’t come through.”

Manual simply could not respond, and after a scoreless seventh, CAL officially finished off the Crimsons to win the Region Seven quarterfinals.

“We got a big hit from Savannah when we needed it, but we just couldn’t hold on,” Hundley said. “We were barely surviving on defense all night and CAL finally broke through when they needed to.”

This loss marks the end of a very successful season for the Manual softball team, who finished the year as the District 25 champions with a record of 24-8. The Crimsons still remain committed to future improvement.

“Next year I want to win Regionals,” Williams said. “I want to have a better record. It’ll be my last year, so I want to go out with a bang.”

“The juniors are honestly already leaders now, and I can definitely see them taking us far,” Riggs said. “I’m going to try to go to as many games as I can, because we’re all so close, but I think the Juniors will do a really good job of leading us next year.”

“It’s definitely really sad,” Riggs said. “This team has been the closest one ever. Losing everything and not being able to play anymore is really sad. All of the seniors are all three best friends.”