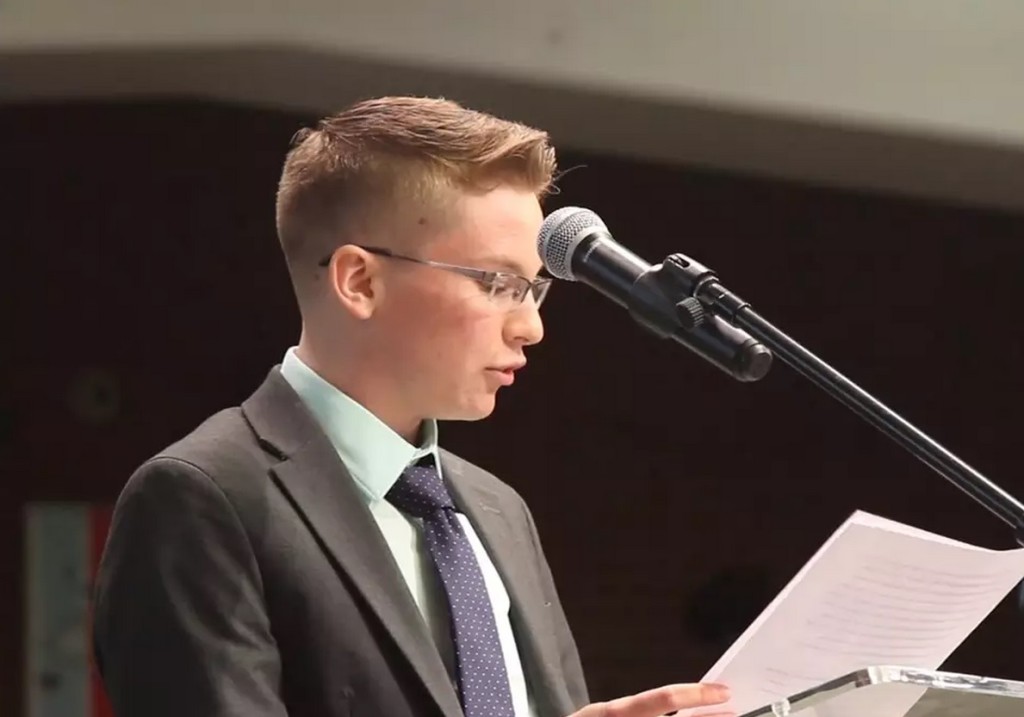 Manual graduate Casey Hoke, who addressed the JCPS board about his experiences as a transgender male student, will be attending the California State Polytechnic Institute of Pomona this fall. Photo by Peter Champelli.

The Jefferson County Board of Education heard the first reading of a proposal to expand the district-wide equal opportunity, discrimination and harassment policy to include protection of political affiliation, gender identity and gender expression at their Aug. 10 meeting.

The board voted 5-2 to hear a second reading of the proposal at a future date, with board members Linda Duncan and Chuck Haddaway opposing the measure.

2015 Manual graduate Casey Hoke spoke at the meeting in favor of the revision, citing incidents of harassment he faced while in high school.

“[The] motivation to succeed and to become college-ready in a JCPS school could only boost for transgender students like myself if policies were extended to include gender identity and expression,” he said. “Students need to know that they too can succeed, be included and be protected from harassment regardless of gender identity or expression.”

Hoke referenced Manual teacher Ms. Martha Brennan (English) as a “model example” of a supportive adult who sought to create an inclusive classroom environment, but he pointed out that some faculty members are not as committed to preventing discrimination.

“There were a lot of instances of bullying and harassment that I went through in JCPS,” Hoke said in an interview following his speech. “I never reported them because I was scared and didn’t know who could help me at that time. There were also instances like the one I mentioned earlier, with Ms. Brennan being so open to discussing differences in identity and background with students, and I wanted to reflect on both the positives and negatives to share with the board.”

A full copy of Hoke’s speech can be found here.

Three other community members spoke in favor of the proposed revision: Michael Aldridge, Executive Director of the Kentucky ACLU; Chris Hartman, Director of the Fairness Campaign and Dawn Wilson, a member of the Louisville Metro Human Relations Commission.

Board member Chris Brady spoke openly in support of the policy, recounting the story of a student he knew from middle school who ended her own life after coming out as lesbian to her family and peers.

“I feel that I have to do what I need to do to make sure we have an open environment for our schools,” he said. “This will be an easy decision for me, and I know it’s not our final vote, but I that’s what I want you to think about, and it’s what I want our community to think about as well.”

On the other hand, board member Linda Duncan hesitated to endorse the revision, as she felt that she did not yet have enough information about the practical implementation of the policy to make an informed decision.

“My main concern is that we don’t yet have any input from the people who actually have to enforce the anti-harassment policy, and I think that their experience would better inform these recommendations,” she said. “I’m also worried about the exposure that some of these changes will make for us legally, especially in terms of due process.”

“If we increased training for administrators, we wouldn’t have to name so many specific groups in the policy,” she continued. “I’m fearful that if we keep listing [groups], we might leave some people out. Training should take care of anti-harassment enforcement.”

Manual student Rowan Little (11, J&C) argued that the proposed amendment to the policy would be beneficial, not just for protecting students against harassment by their peers, but for ensuring that students also feel safe around school staff and faculty.

Little added that though they recognize the difficulty the board faces in crafting a universal anti-harassment policy, it is a reasonable first step to add gender identity to the list of protected groups.

“I do think that it’s hard to make anti-harassment policies that support everybody, but I think there are definitely small things you can do to start,” they said. “And I don’t think it would be too hard to ask that people try to make things more specific.”

JCPS has struggled before with addressing the issues that LGBTQA+ students face in schools. In May 2014, Atherton High School’s Site Based Decision Making Council (SBDM) voted to add “gender identity” to their school’s nondiscrimination policy after parents voiced concerns over administrators allowing a transgender female to use girls’ restrooms.

The board will likely hear another reading of the proposed changes in two to four weeks.